MediaWiki is the free open-source wiki software used to power Wikipedia and thousands of other wikis. The contributions of hundreds of individual developers have helped make it a feature-rich, secure and scalable platform capable of powering some of the largest collaboratively edited reference projects in the world. MediaWiki is used by organizations ranging from SFMOMA to NASA, allowing teams to maintain their documentation in one extensible and adaptable place.

While wiki software is a type of content management software, it has one major difference from most other CMS systems. There are no defined content owners or leaders. This makes it particularly suited to collaboration. Wikis also have little implicit structure, allowing the structure to emerge according to the needs of the users.

MediaWiki began as a dedicated Wikipedia wiki engine. The « Wikipedia software » was officially named « MediaWiki » in 2003 as wordplay on the Wikimedia Foundation’s name. Now that MediaWiki has a much wider userbase than the Wikimedia projects, the MediaWiki developers make software changes to accommodate the needs of this entire family and do not make judgements about which wiki-based projects are or aren’t worthy of support. 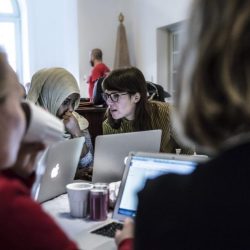