In 2010, two artists contacted Taschen, a book publisher, to point out that out of 97 volumes published in their Basic Art series, only five included women. Like the Basic Art series, Wikipedia serves an introductory audience, and in this particular area, Wikipedia succeeds where Taschen has not.

In 2010, the artists Ditte Ejlerskov and EvaMarie Lindahl contacted Taschen, a book publisher, to point out that out of 97 volumes published in the Basic Art series, only five included women: Tamara de Lempicka, Maria Helena Vieira da Silva, Frida Kahlo, Georgia O’Keeffe, and Jeanne-Claude (who shares a volume and a Wikipedia article with her collaborator and husband Christo).

Taschen asked the pair about which artists they had omitted and should include in the series. That particular artists would be omitted through oversight or happenstance is reasonable, but that one of the world’s leading publishers of art books is completely unaware of their major omissions is startling, as any art aficionado could instantly produce at least a short list of omissions.

Ejlerskov and Lindahl produced a list of 100. This list was the basis for their exhibition last year at the Malmö Konsthall in Sweden called About: The Blank Pages. They assembled the 97 Basic Art books on two bookshelves, accompanied by covers they had created for each of the women on their list, covering books of blank pages.

The Basic Art series is not the canon. Canonicity or artistic excellence is certainly one criterion for inclusion, but artists are also clearly included on the basis of popularity, artistic influence, or representation of a particular historical moment, so one cannot argue that particular women were excluded from the list because their work is not as good as male artists included in the series.

Even the most fervent adherents of Basic Art subjects Norman Rockwell or Keith Haring will not attempt to claim that they belong in the same rank as Michelangelo. One can quibble about many of the names on Ejlerskov and Lindahl’s list (or ones omitted from the list, such as Remedios Varo, Tracey Emin, Kara Walker, or Sarah Goodridge), but one cannot seriously argue that artists like Mary Cassatt, Artemisia Gentileschi, Judy Chicago, and Cindy Sherman do not far outstrip some in the Basic Art series like Friedensreich Hundertwasser or Franz Stuck or the preposterous Fernando Botero in terms of artistic merit, influence, historical importance, and popularity.

Like the Basic Art series, Wikipedia serves an introductory audience, and in this particular area, Wikipedia succeeds where Taschen has failed. Of the 100 names on the list, which I’ve linked in my userspace, only two artists were omitted from the English Wikipedia when I wrote this editorial: the Canadian artist Helen Frances Gregor appears to be absent from Wikipedia entirely, and Russian painter Nadia Khodasevich Leger is mentioned a few times in passing as the wife of Fernand Léger, but not as an artist in her own right.

Wikipedia has many issues with systemic and gender bias, but we also have the ability to address those biases in a way that a traditional publisher like Taschen cannot; we can question and argue about those omissions while Taschen cannot recognize its own errors. We can form projects like Art + Feminism and WikiProject Women artists to systematically address these issues and improve our own coverage, while Taschen requires publicity before it can even begin to do so.

It is another testament to the ability of Wikipedia to respond to omissions like these that even before this editorial was published, an enterprising editor created articles on the missing artists—articles that I expect will be featured on Wikipedia’s Did You Know within a week.

This blog post was originally published in the Signpost, a news journal about the English Wikipedia and the Wikimedia community. It was edited and several images removed for publication on the Wikimedia Blog. The views expressed may not reflect any official opinions of the Wikimedia Foundation. Idil Keysan illustrates Wikipedia, “the brain of the world,” in a set of gifs

Idil Keysan is a Turkish artist and illustrator known for her playful and relatable animated work on Giphy, the GIF-hosting platform. Idil’s keen understanding of what’s trending and how audiences interact with gifs have helped her work get over two billion views on the website. Her fun, charming, brightly colored illustrations are inspired by “famous…. 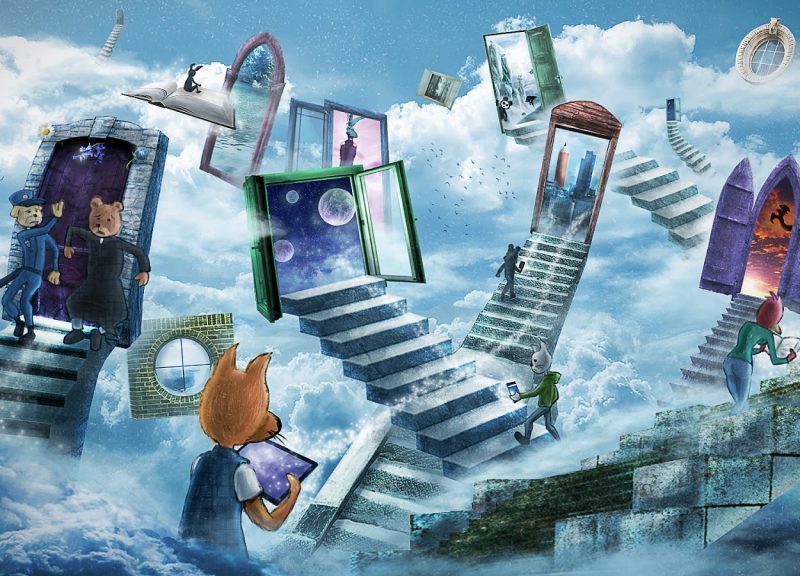 What does open access to knowledge mean to you? That was the question we posed to entrants in the Heart of Knowledge contest, an international arts competition the Wikimedia Foundation launched this April. We were blown away by the submissions we received from artists and writers across five continents. According to entrants’ self-reported data, our….

The doors of knowledge - Redness Design (1)