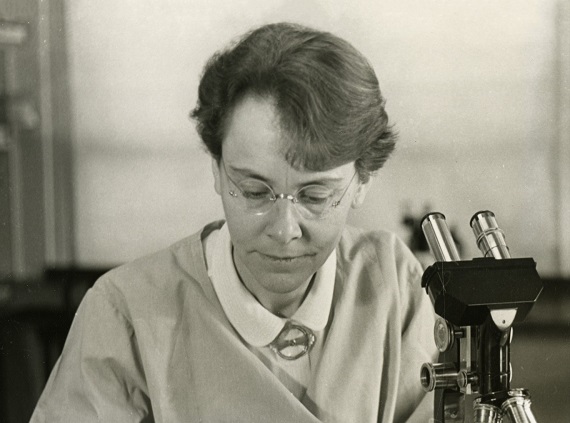 Photo from the Smithsonian, public domain.

One of the many women scientist biographies Emily Temple-Wood has worked on is Barbara McClintock, a 1983 winner of the Nobel Prize.

By day, Emily Temple-Wood is a biology undergraduate at Loyola University in Chicago, Illinois. She has been accepted to Midwestern University medical school and will start in late 2016.

By night, she smites trolls on the internet with positive punishment: for each harassing email she receives, one Wikipedia article on a woman in science will be created.

Temple-Wood founded WikiProject Women Scientists in 2012 to be a collaborative drive to create and maintain Wikipedia’s biographies of female scientists from throughout history—a steep task to accomplish, given that their home page notes that “part of Wikipedia’s systemic bias is that women in science are woefully underrepresented.” She put the idea into action on one late night, as the we recounted in a profile of her two years ago: “A substantial number of female fellows belonging to the prestigious Royal Society, a sort of who’s who in the world of science, had no Wikipedia articles written about them. ‘I got [angry] and wrote an article that night … I literally sat in the hallway in the dorm until 2am writing [my] first women in science [Wikipedia] article.’ ”

Only a few years in, they are well on their way: the project has gotten 376 women scientists onto Wikipedia’s front-page “Did you know?” section, and 30 articles through a peer-review process (designated with a “good” or “featured” rating).

Temple-Wood also hosts edit-a-thons at the university she attends and co-facilitated a Women in Red edit-a-thon with editor Rosie Stephenson-Goodknight, who told us that Temple-Wood is the “poster child of the efforts to address Wikipedia’s scientific gender gap.”

Siko Bouterse, a former Wikimedia Foundation staff member, told us that Temple-Wood’s impact on the gender gap has been “epic”:

She’s created hundreds of articles about women scientists, including articles that address multiple gaps in Wikipedia—it’s really important that she’s not just writing about white women scientists, she’s also working to address underrepresentation of women of color in Wikipedia and looking at other points of intersectionality as well. And perhaps most importantly, because we’re much stronger collectively than alone, Emily has taught and inspired others to do the same … When I was a kid, I could count the number of women scientists I was aware of on one hand. But I know our daughters are going to have access to so much more free knowledge about scientists who look like them, thanks to Emily’s efforts, and that’s really powerful.

Unfortunately, Temple-Wood has been targeted by a significant amount of harassment based on her gender. Throwaway email addresses frequently send her requests for dates, condescendingly discuss her body, insinuate that she got to where she is through sexual favors, ask her to reserve those favors for themselves, and when she doesn’t reply, they spew profanities.

This is not uncommon for prominent young women on the Internet, but Temple-Wood is fighting back in her own way by using it as motivation to continue her quest. For every harassing email she receives, Temple-Wood and a growing number of fellow Wikipedians are quietly creating a new biography on a woman scientist, such as Liliana Lubinska, Katharine Luomala, or Adelaida Lukanina.

This harassment is something that Bouterse calls “deplorable, unacceptable, and unfortunately all-too emblematic of what women are facing on the internet today”:

The emotional labor of weathering this kind of harassment is huge. Amazingly, rather than deciding this particular public space must not be for her, Emily has been able to channel every instance of harassment into more fuel for her focus, so it’s backfiring against those who hope to silence women online. That takes courage.

Temple-Wood already has a backlog of articles to create; she thanks her harassers for helping to fight against systemic bias on Wikipedia. In a similar vein, Stephenson-Goodknight told us that “Someday we’ll be writing a biography about her and her scientific discoveries, mark my word. I wonder what her harassers and detractors will think about that, especially if Emily’s scientific discoveries help heal their mom or sister.”

This article has been updated to correct the spelling of Siko Bouterse’s last name and the date of Temple-Wood’s entry into medical school.