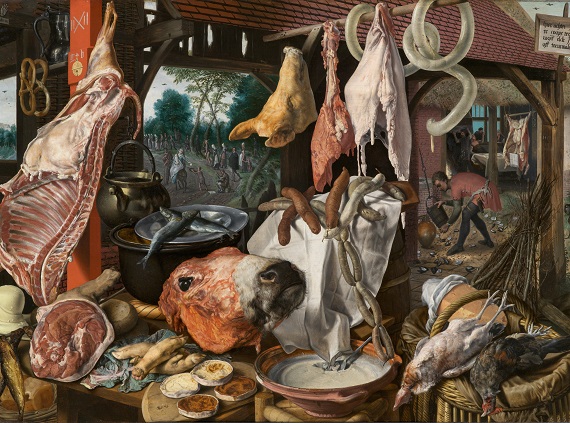 Tarrare was a French man with a slim profile and a prodigious, Hulk-sized appetite.

Tarrare was born in 1772. By the time he was a teen, he could devour a quarter of a cow in one day, enough that his family ran him out onto the streets. Still, he only weighed about 100 pounds (45 kilograms) and had a very interesting appearance, according to the Wikipedia article about him:

He was described as having unusually soft fair hair and an abnormally wide mouth, in which his teeth were heavily stained and on which the lips were almost invisible. When he had not eaten, his skin would hang so loosely that he could wrap the fold of skin from his abdomen around his waist. When full, his abdomen would distend “like a huge balloon”. The skin of his cheeks was wrinkled and hung loosely, and when stretched out, he could hold twelve eggs or apples in his mouth. His body was hot to the touch and he sweated heavily, constantly suffering from foul body odour; he was described as stinking “to such a degree that he could not be endured within the distance of twenty paces”.

Tarrare joined the French Revolutionary Army in 1792. Unfortunately, he quickly found that standard military rations were far from enough to satisfy him. He quickly fell victim to exhaustion and was admitted to a military hospital, where even quadrupling the normal ration was found to not be enough.

French officials decided that they should keep in the hospital for further study, where he ate food intended for fifteen people in one sitting. On other occasions, he ate a live cat, snakes, lizards, puppies, and an entire eel.

Military officers decided to employ Tarrare as a courier, as he would have the perfect hiding place—his stomach. This did not work out, as he was captured by the Prussians and put through a mock execution.

Terrified by the experience, Tarrare went back to the hospital and declared that he was prepared to try anything that might cure his appetite, like laudanum, wine vinegar, tobacco pills, and diets. All failed, especially the dieting, as he was discovered fighting stray dogs for food and drinking the blood of other patients in the hospital.

Tarrare was finally kicked out of the hospital when a fourteen-month-old child disappeared, as he was suspected of eating them.

Year later, Tarrare was found dying of tuberculosis. One physician was brave enough to do an autopsy, finding:

The corpse rotted quickly; the surgeons of the hospital refused to dissect it. Tessier [the physician], however, wanted to find out how Tarrare differed from the norm internally … At the autopsy, Tarrare’s gullet was found to be abnormally wide and when his jaws were opened, surgeons could see down a broad canal into the stomach. His body was found to be filled with pus, his liver and gallbladder were abnormally large, and his stomach was enormous, covered in ulcers and filling most of his abdominal cavity.

It’s hard to not feel sorry for the man. He was so hungry so often that he would eat anything in a fruitless attempt to sate it.

You can read more about Tarrare in Wikipedia’s featured article about him.

“Wait, what?” is a new series on the Wikimedia blog, bringing you some of the weirdest and unique topics that have been covered by Wikipedia’s editors. If you would like to write one, please contact blogteam@wikimedia.org.