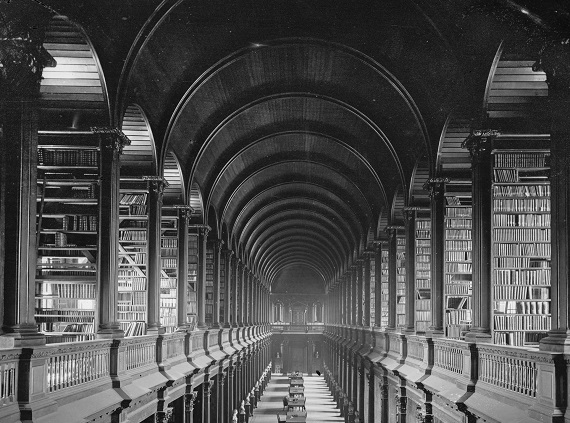 Photo via the National Library of Ireland, no known copyright restrictions.

It is no stretch to say that without books, Wikipedia would not exist.

The free encyclopedia relies on citations to ensure the information you find on Wikipedia is verifiable and based in reliable sources.  Even in the digital age, many of the highest-quality sources are the books available in your local library.

Yet despite their importance, adding references to Wikipedia has been difficult at times, requiring at minimum a basic knowledge of wikicode. Steady improvements have been made over the years to make it easier to add citations, including through the cite tool on Wikimedia’s visual editing interface. However, adding citations to books on Wikipedia is about to get a lot easier.

A new partnership between the Wikimedia Foundation’s Wikipedia Library and OCLC, a global nonprofit library cooperative, will allow editors to easily generate citations to millions of books on Wikipedia using OCLC’s WorldCat—the largest database of books in the world, spanning the collections of more than 72,000 libraries.

The WorldCat database will be integrated into the cite tool so that an editor can type in an ISBN, an identifier available inside hundreds of millions of published books since the 1970s, and get back a Wikipedia-ready book citation, including authors, titles, and publishers.

“Wikipedia and its editors worldwide collaborate to create one of the most popular global resources on the Web,” said Chip Nilges, OCLC Vice President, Business Development. “OCLC and its member libraries collaborate to make WorldCat the premier global resource for discovery of library collections. Through this partnership, dedicated editors and librarians worldwide are working together to make Wikipedia a richer research experience, and readers are finding supporting material they want through links to libraries.”

A detailed step-by-step process on how to use this feature is below. It expands upon Wikipedia’s current method of citation auto-filling, which allows editors to generate a citation from a single online identifier, like a web address (URL) or digital object identifier (DOI).

How to use the cite tool

2) Switch to the visual editor 3) Use the visual editor’s cite function 6) Click “insert”, and the rich citation is added to Wikipedia

More information on this is available on Mediawiki.org.

This collaboration between the Wikipedia Library and OCLC deepens an already strong relationship between OCLC and the Wikimedia movement. In 2012, OCLC worked with a Wikipedian in Residence, Max Klein, to explore ways that library metadata could contribute to Wikipedia. The result of their work was a Wikipedia bot that adds VIAF authority control numbers (Virtual International Authority File) to Wikipedia infoboxes—in cataloguing-speak, adding numbers that easily and consistently identify people. Long-time Wikipedian and librarian Merrilee Proffitt, who works at OCLC Research, spearheaded the VIAF initiative. She was joined by Cindy Aden (née Cunningham) in a later collaboration with the Wikipedia Library; together, they pioneered the Wikipedia Visiting Scholar position and established positions at five universities.

Merrilee Proffitt said of the new WorldCat initiative, “Quality sources​ are at the heart of every Wikipedia article, be it a stub or a feature level article. We want adding citations to be as easy as possible, and it makes sense to harness identifiers to ease the burden. Thanks to the hard work of the thousands of catalogers and the contribution of OCLC member libraries, WorldCat contains ISBNs which​ can help when a source is a monograph. As an added bonus, the resulting citation helps lead end users to libraries where they can find those trusted sources and others like them—for free.”

At library conferences like American Library Association Annual, the Wikipedia Library, and OCLC have often worked together to share information about each organization to interested librarians, and Lorcan Dempsey, Vice President and Chief Strategist of OCLC, has spoken progressively about Wikipedia’s growing role in the research ecosystem of library users. In March 2017, OCLC announced that they were hiring Monika Sengul-Jones as a Wikipedian-in-Residence, a position funded by a project grant from the Wikimedia Foundation, to facilitate their Wikipedia + Libraries: Better Together project. In 2016, OCLC was a winner of the Knight News Challenge for a project to promote participation of public librarians on Wikipedia.

This partnership empowers Wikipedia editors and readers to harness the impact of full and accurate citations. With improved access to references that back up the facts, Wikipedia becomes a better, richer free knowledge resource for all.

You can read more about this partnership in OCLC’s press release.