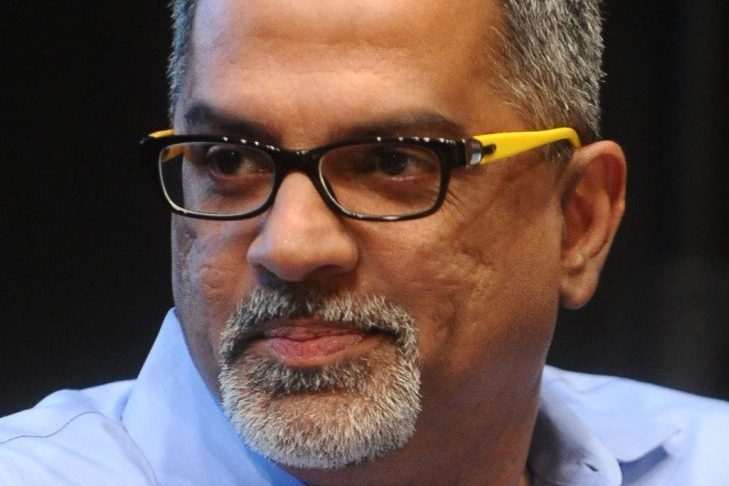 Raju Narisetti, a veteran media executive and journalist, joined the Wikimedia Foundation Board of Trustees in October 2017. Narisetti is currently CEO of Univision Communications Inc’s Gizmodo Media Group, the publisher of Gizmodo, Jezebel, Lifehacker, The Root, and others, and spends a lot of time thinking about how to reach new audiences and the changing media landscape. We recently asked him about some of the challenges facing information and access in the coming years. Our conversation is below.

You recently said, “There has never been more urgency in Wikipedia’s 16-year history than now, for upholding the values of free exchange of information and knowledge.” Would you be able to further expand on your thoughts and the topics mentioned in this quote?

To me, it is increasingly obvious that we will look back at 2017 as a year where there were systematic and sustained challenges worldwide to a very fundamental human right—the right to access information.

Couple that with the epidemic of false or fake news that we are encountering; the growing challenges of hundreds of millions of people “living” inside seemingly closed information loops; and the relentless exploitation of data being collected passively and actively—and we have the makings of a perfect storm of misinformation, leading to unrest and even potential conflict.

In Wikipedia and the global community that underpins that living repository, we have a proven antidote to many of these problems. So, the onus is all of us, particularly at the Foundation, to make sure we are in a position to be that resource today, tomorrow, and for years to come, because this issue is not going away anytime soon.

Why did you join the Wikimedia Foundation’s Board of Trustees?

Can I confess and admit that it was combination of a big dollop of guilt coupled with a lot of excitement? The guilt was really from years of being a consumer of Wikimedia and not contributing to it.

So, when the opportunity to join Wikimedia Foundation’s Board of Trustees was presented, it felt like a way for me to start contributing to the continued success of the community. The anticipation and excitement was around the challenges we face—in reaching new, younger audiences; deepening reader and contributor ties in more countries around world, including many non-English language-centric nations; in making sure we stay ahead of mobile and other technologies that significantly influence and impact how information is created and distributed. These are all topics where, in nearly three decades of working in journalism across three continents, I have substantial experience, even if I don’t have all the answers.

And I hope I can be of help as the Foundation looks to support the movement in multiple ways and in early stages of a longer term strategic vision and roadmap that makes Wikipedia the bedrock platform for free knowledge. I am in a learning mode and already in constant awe of the durability and mission-driven values of the global Wikipedia community, and the ever-growing scale of what we collectively create and disseminate.

What is, in your view, Wikipedia’s greatest challenge in coming years?

To have the resources and ability to stay free, and to be the place where we willingly put in information and knowledge, and take out a greater understanding, in equal measure. This will require providing the Wikipedia community with the resources and air-cover needed to continue that primary mission, without fear or favor.

In the US, as in many other parts of the world, there is an ongoing discussion about journalism’s future in an ecosystem that’s increasingly dependent on platforms for distribution. Many of the models have been upended in recent years, particularly for publications that have largely been dependent on advertising dollars. How has this changed the media landscape in the US and in the rest of the world?

Thanks to digital technologies, our previously ‘captive’ audiences are now a lot more promiscuous because, with the click of a mouse, the swipe of a finger and increasingly by talking to our devices, we can often go to myriad sources anywhere in the world. As a result, news organizations can no longer simply rely on people coming to their platforms—in print or digital—and now have to go where audiences are, whether it is a social media platform or larger ecosystems such as chat apps, which are increasingly becoming a “closed” proxy for the open internet. That fundamentally alters the business model, one that was previously based on “monetizing” audiences who come to the news brand’s platform. And that has been the existential challenge for media companies in figuring out how to continue to fund the creation of relevant and useful journalism.

For us at Wikimedia, it is also a challenge as how do we take Wikipedia to corners of the digital world instead of always assuming audiences can come to us through search or directly. This will be a major work-in-progress because we do want to make sure we are exposing millions of potential Wikipedia consumers—and hopefully, contributors—to our offerings where and how they use the internet.

The title of this piece has been updated.