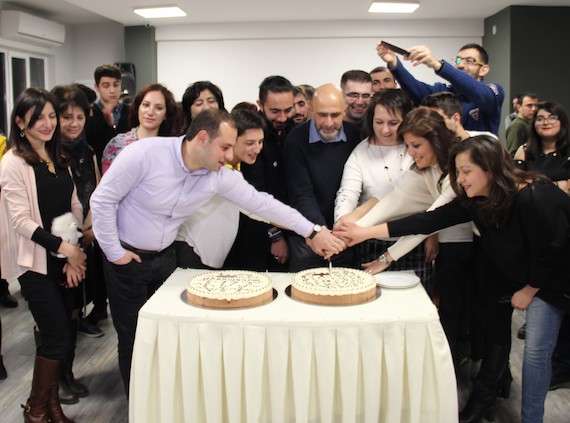 Mher Bekaryan, also from Wikimedia Armenia, presented the achievements of both the Armenian Wikipedia and Wikimedia Armenia in 2017. Mher emphasized the role of the events held and volunteer effort in the development of Wikimedia projects in Armenia. Afterwards, Bekaryan shared the results of the contests and joint projects of 2017, including CEE Spring 2017, the Europeana 1914–18 challenge, and the Austrian-Armenian writing contests, as well as for announcing the Armenian winners of Wiki Loves Monuments 2017.

Bekaryan concluded with the announcement of the Armenian Wikipedian of the year. Throughout the year Wikimedia Armenia follows the activity of Armenian Wikipedians, and awarded User:Sigma’am for his service, commitment and dedication to the movement in the last year.

The day concluded with a Wikipedia birthday cake, group photos, and social activities. For those who could not attend the event, Wikimedia Armenia streamed the event live on social media.

Wikipedians Wojciech Pędzich and Jarosław Błaszczak were guests at the RDC radio station on 15 January for an interview about Wikipedia. Pędzich and Błaszczak shared with the public their stories with Wikipedia, how they started, what the early days looked like and what motivated them to keep editing. They have also shared with the community what Wikipedia and its community are like. They discussed with their host “what makes the project different—and more powerful—than other, more restricted, ideas of setting up an online knowledge compendium,” Pędzich and Błaszczak told us.

“We underlined the meritocracy of the project, its grassroot character, the fact that anyone willing enough (with the requirement of will and technical assets set at a very reasonable low level) can contribute, and invited the listeners to start editing as soon as the program came to a close. We talked about our devotion to the volunteer activity we fit well with and the other dedicated Wikipedians and the fact that we would like others to join in and fill the gaps in the sum of human knowledge, especially in underrepresented languages. We hope to see some new edits from the Warsaw area and anywhere reachable by the podcast after the program.” On Friday, 5 January, the annual winter meetup of Hebrew Wikipedia editors was held in celebration of the 17th anniversary of Wikipedia.

Despite the stormy weather, nearly 60 Wikimedians came to the meetup at the IBM offices in Tel Aviv. During the event, there was an overview presentation of 2017 on Hebrew Wikipedia, a summary of Wikimedia Israel’s activities during the year, lectures on various topics by members of the Hebrew community, and a Wikipedia birthday cake, specially designed for the celebration. Members of the Wikimedia TN User Group celebrated Wikipedia’s 17th anniversary in a meeting that discussed the coming projects of the affiliate. Attendees confirmed their vision on promoting the open knowledge in Tunisia along with Bridging the knowledge gap through their involvement in their African community. It is worth mentioning that Wikimedia TN is hosting WikiIndaba 2018, the third conference for the African Wikimedia community. Plans for new projects and activities to tackle the gender gap on the free encyclopedia were also discussed. The shared knowledge group in Macedonia held a social event to celebrate the Wikipedia day and discuss the projects and activities held in the past year and plans for the year ahead. During the same week, on January 18, an open discussion entitled Digitization in 21 century was held in collaboration with the City Library in Skopje. On 19 January, Egypt Wikimedians user group held an event to celebrate the Wikipedia day. The event included a presentation on Wikipedia, how it started and what challenges the encyclopedia faces today. The second session was a workshop on how to edit Wikipedia with a contest for the best articles created during the sessions. Prizes of the Wiki Loves Africa, photography contest in Egypt were awarded to the winners at the end of the celebration. In Ghana, the community user group encouraged Wikipedia editors to create a new article to celebrate Wikipedia’s seventeenth birhday. The group held a campaign on their social media channels and asked the participants to share their articles on the #Wikipedia17 and #NowEditingWikipedia hashtags.

On Wikipedia day, Wikimedia Algeria User group announced a new MOOC (Massive Open Online Course) on how to edit the Arabic Wikipedia. WikiMasaq, the new course was suggested by the user group in WikiArabia 2017 in Cairo. The group decided to launch it on Wikipedia’s birthday. The course is held for three consecutive weeks that can be attended by anyone.

Wikipedia was the topic of a TV morning show in Bulgaria and another interview on the National Radio with the Bulgarian editor Spasimir Pilev on the occasion of Wikipedia’s 17th anniversary. “We talked about Wikipedia in general,” says Pilev, “more than talking about the Bulgarian Wikipedia, because for many people in Bulgaria it is still not very clear how to edit, who adds the content, etc. We have also discussed the collaborations of our community. I mentioned our work with the Bulgarian Archive State Agency and WikiBotevgrad and how important they are to attracting new editors. They were interested in how many people are editing in Wikipedia in Bulgarian.”

The Wikipedia Day 2018 NYC was an all day celebration and mini-conference held on Sunday, 14 January, 2018, hosted by Wikimedia New York City at the Ace Hotel in Manhattan. This Wikipedia Day celebrated Wikipedia’s 17th birthday, where 150 attendees joined conversations about Wikimedia and allied projects presented by Free Culture Alliance NYC partners.