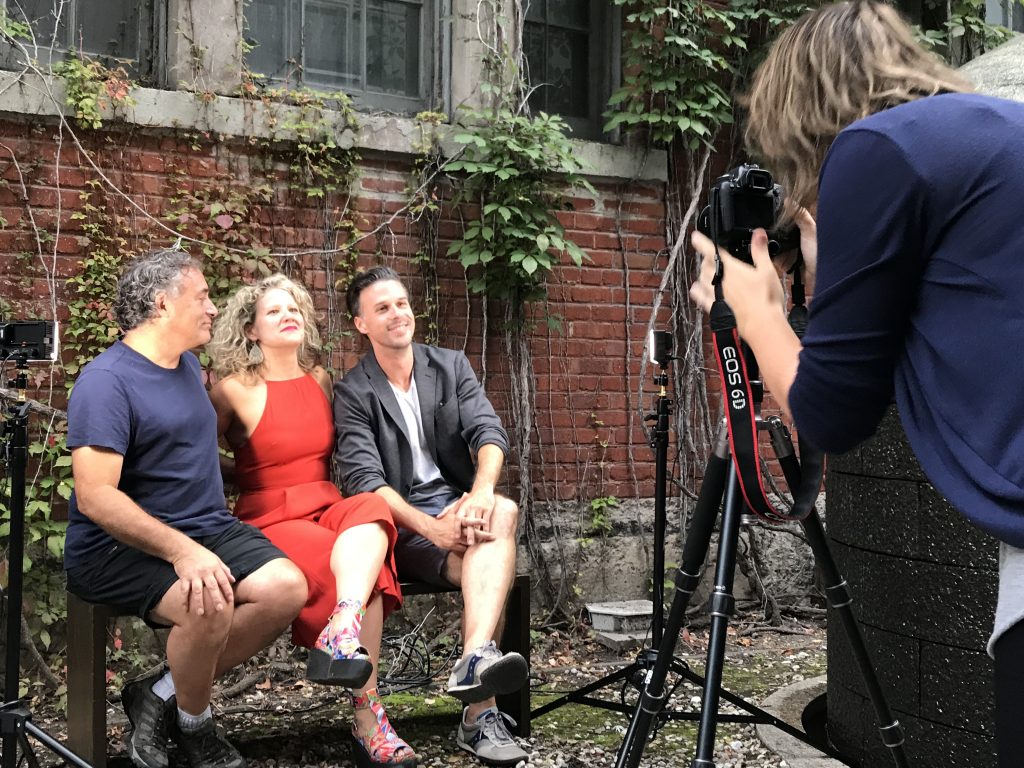 If a picture is worth a thousand words, what words should be used when a Wikipedia article’s lead image is of poor quality?

The archive allows the chapter, working hand in hand with Le Café des savoirs libres, to put up a booth at film festivals hosted by the archive. You can see one the top of this post, captured during last November’s animation film summit.

Equipped with a camera and a lighting kit, a volunteer Wikimedia editor invited artists to be photographed to illustrate their Wikipedia article. If they accepted, they simply stepped to the side for a few minutes. The resulting photo (demonstrably owned by the photographer) would later be uploaded to Wikimedia Commons, the Wikimedia movement’s photo repository and holder of many of the images used in Wikipedia’s articles. The film archive also hosts monthly Wikipedia workshops, where an artist is invited to come and talk about their life and work. The information is used by the editors in attendance to come up with an appropriate outline and structure for the article—and while they sort that out, the artist is sat down in the archive’s studio for photographs. One particularly useful session was with the artist Jacques Drouin, who brought along a pinscreen used for animation and allowed Wikimedians to photograph it.

“The workshop allowed editors to see and experience a unique cinematographic technique, one that had once been almost lost to history before Drouin revived it,” says Benoit Rochon, the President of Wikimedia Canada. Film isn’t the only medium covered under the initiative; Wikimedia Canada has moved into print as well. They’ve taken the template used at the film summit and applied it to Montreal’s book fairs, which often feature author lectures and book signing. As of publishing, more than twenty have agreed to sit down with volunteer photographers, including Michel Tremblay, who Rochon says is “one of the most influential writers in Quebec.”

Rochon noted that the artists like Tremblay are far more accepting of these photography sessions than he first thought they would be. “Artists and production houses have been quick to recognize the importance of Wikipedia and having illustrated articles,” he says. You might ask why the celebrities at these events don’t simply donate a photo for Wikipedia’s use. The answer is complicated.

First, Wikipedia and Wikimedia Commons only accept photos that are freely licensed. More specifically, they have to be willing to give their media away under a license that allows it to be freely re-used, even by commercial entities.

Second, the process for demonstrating that you have permission to donate an image to the site’s photo repository is rather onerous—so much so that Wikimedia Canada has found that when they ask celebrities or their representatives to complete it, they often drop out.

Instead, getting Wikimedia volunteer photographers access to these events to take photos themselves means that they hold the copyright and can donate it themselves through a process that most have gone through hundreds or even thousands of times.

Rochon hopes that the project continues to be successful, as he believes that high-quality photographs can have hidden effects on Wikipedia’s readers. “When the image at the head of an article about a person is of poor quality, this gives readers the impression that the article is also of poor quality,” he says. “If a picture is worth a thousand words, and the first thing a user sees is a mediocre picture, we can say that the first thousand words of the article are mediocre!”

Keep an eye out for more images coming out over the next few months, this time for events held at television studios and radio stations.

You can see more images from this project over on Wikimedia Commons.

* Wikimedia Canada is a local and independent chapter that works to advance the Wikimedia movement in the country.