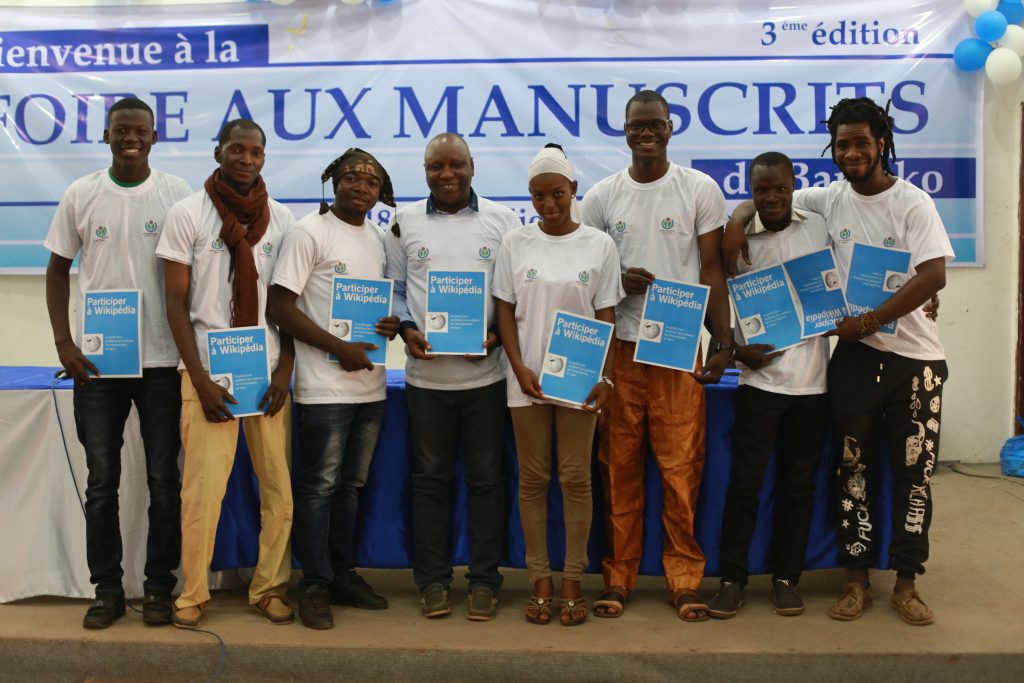 Over the coming months, Anne will be interviewing people who work to remove access barriers for people across the world. In this installment, she interviews Florence Devouard, who has been a Wikimedian since the early days. Her work in the Wikimedia movement has ranged from content creation, to being a member of the Wikimedia Foundation board, to her more recent focus on supporting the growth of African language projects. In this interview, Anne and Florence discuss WikiFundi, an offline editing tool for remote schools.

First, can you tell us about your work in Africa with Wikimedia? What got you started? What have been your proudest accomplishments?

I guess my first interest related to African participation can be traced back to the first Wikimania conference held in Frankfurt in 2005! I gave an overview of the digital divide in African countries and provided an estimate of Wikimedia projects’ visibility in Africa, as well as African editor participation and impact. Back then, I already wanted to increase awareness, foster higher contribution rate and build African-language projects.

In the past 5 years, I have really been able to really make a difference through the setting up several projects with different focuses: increasing visual content with the Wiki Loves Africa photo content, providing offline solutions with WikiFundi, increasing participation in GLAM-related projects and conducting outreach with Wiki Loves Women, teaching digital skills acquisition with WikiSchools Africa, and doing some applied research with African primary schools curriculum and motivational factors. All those projects belong to the larger WikiAfrica movement. My pride lies in the current growth of the African Wikimedia community, as I know I played a part in it.

What is WikiFundi? How does it work?

WikiFundi is a software application that provides the same experience as editing Wikipedia, whilst not connected to the Internet. It can be run using a local server, such as a Raspberry PI, and is made available via a local wifi hotspot. WikiFundi develops the ability for a group of people within the same physical space to collaborate with each other on writing articles or learning how to work with Wikipedia’s editing interface when internet access and electricity outages fail or are not available at all.

How did you decide to take on this software/hardware project in addition to your other efforts? How were you connected with Orange?

Back in 2013, Isla Haddow-Flood and I ran the Kumusha Takes Wiki project, in Ivory Coast with Samuel and in Uganda with Erina. We realized one of the challenges in running this outreach project was the difficulty of planning and running an edit-a-thon or a training session in a context when Internet is unreliable, sometimes plain missing, or too expensive. Some time later, I discussed the issue with Luc Héripret from the Fondation Orange, and it turned out that they were working on the Digital Schools program (which currently reach 130,000 children in schools and 250,000 people in rural villages). The Fondation Orange was providing tablets, servers, and educational resources (which naturally included Kiwix content) to schools with no internet access at all. We clearly shared an interest here and I decided to come up with a proposal to them.

What is your vision for WikiFundi?

In my vision, anyone should be able to participate in building the sum of human knowledge, regardless of language, physical location, nationality, age, and connectivity status.

Whilst we are very inclusive in some aspects (such as language diversity), we are not so inclusive when it comes to physical location and connectivity status, with some people been largely excluded from participating because they are in non or poorly connected locations. Could we do more to facilitate participation from people living in prisons? In refugee camps? In rural isolated areas? In slums? Most of our offline solutions currently aim at giving access to the resources, not allowing people to participate in creating them.

I only took a little piece of the big puzzle: Wikipedia as a project, English and French as languages, Africa as a physical location. But, I’d love to see a larger solution or set of solutions emerge to extend the range of those human beings that can actually actively participate to build the sum of human knowledge.

How do you see digital literacy and education as part of your vision? Are they relevant factors?

The focus is 1) getting prospective contributors acquainted with the Wikiplatform as well as to allow training in regions or places or situations with access issues as well as 2) building soft skills (ICT literacy, collaboration, critical thinking…).  WikiSkills, which I co-wrote, promotes innovative pedagogical approaches that foster creativity, competitiveness, employability and entrepreneurial spirit, equity, social cohesion and active citizenship.

What happened in the first year? What did you learn? What lessons can you share with other people who might want to do similar projects?

We released the first version of WikiFundi in January 2017. It was made available in different contexts during the year.

The software was distributed with a raspberry PI along with various resources, as a kit, to a dozen groups of Wikimedians across Africa, to support them in their outreach work. Anyone can download the software from that page.

The software was also distributed in many African schools, in particular as part of the Digital Schools Program of the Foundation Orange; it was simply added to the educational resources and software that the Foundation already provides to their schools network. To foster use of WikiFundi, we organised a writing contest involving 30 primary schools in Mali, Madagascar, Tunisia and Guinea, in collaboration with Foundation Orange and local Wikimedians. Given the age of the kids, the content produced was hosted on Vikidia. I (manually) collected absolutely delightful texts, as well as photos, drawings and videos from the kids of those schools. It may appear anecdotal… but two years in the past, the kids of those schools had never held a tablet, never seen a computer, knew nothing about Wikipedia. And now they produce articles. That’s SO cool.

Main lesson: for offline contexts—a reliable partner with local presence is a must-have.

What’s next for WikiFundi? What are you most excited about?

We are working on the next version with the technical support of Kiwix, hopefully to be released next summer. If you have software developing skills and want to help, contact us!

This release will be mostly bug fixing and improvements to make it more user-friendly. During WikiIndaba, Zack McCune (from the Wikimedia Foundation) also helped me in shooting introductory videos with the help of Afek and Sami from Tunisia, Georges from Cameroon and Erina from Uganda.

The most exciting element is that there are discussions ongoing to create a synchronization system. At the moment, WikiFundi is completely offline, which is not an issue as long as it is only used for training and local writing activities, but becomes a problem when the authors want their articles published online. Finalized articles have to be retrieved manually by local facilitators to be imported on Wikipedia or Vikidia, which is obviously not very practical. This synchronicity issue that I currently face in the school of the island of Antsoheribory (Madagascar) is also somewhat also faced in the ISS  in low Earth orbit. …which brings up a thought: could we manage to synchronize “offline” wiki platforms with an intermediary server, so that the content  produced by kids in primary schools of Antsoheribory and hosted on the WikiFundi could be collected automatically and becomes accessible to the inhabitants of the ISS? Antsoheribory seen from ISS?

How else can the Wikimedia Foundation help?

There is a big need for offline solutions. The Wikimedia Foundation is already helping financially in supporting this second version of WikiFundi. It is also very helpful with communication, spreading the word and facilitating networking between the different actors of offline solutions. It can further help in facilitating the “Antsoheribory seen from ISS” project (aka Async Wikis) come true.

Who do you rely on to learn more about offline educational resources? What resources (conferences, people, spaces) exist for people who want to know more?