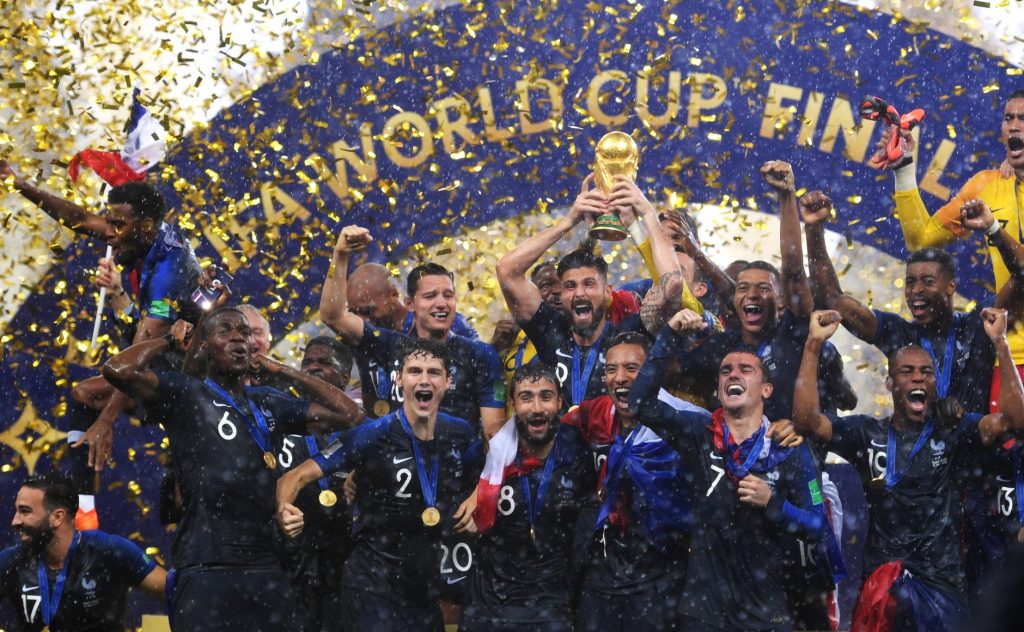 People visited Wikipedia over 190 billion times in 2018 alone, many motivated by the encyclopedia’s wealth of in-depth articles about topics you didn’t know enough about.

But in looking at the English Wikipedia’s most-popular articles of 2018, it’s clear that one motivation reigned supreme. People wanted to keep up with the popular culture moments happening around them—including celebrities, the newest film and television releases, and football, known as “soccer” to Americans. (Some notes on these topics follow, with the full list farther down.)

From celebrity news, we’ll get the bad news out of the way: with over 38 million views, the most-popular Wikipedia article of 2018 was the article about deaths in that year.

Following at #8 was Stephen Hawking, who passed away in the middle of March and was one of the most influential scientists of all time. Over ten million of these views came in the week of his death. If you add up all the pageviews across all language Wikipedias, that total went above 27 million—articles about Hawking were the most popular in March on the Spanish, German, French, Portuguese, Arabic, Polish, and Farsi Wikipedias. At #16 is rapper XXXTentacion, who had three different singles chart in the 2018 Billboard Hot 100 lists before his death at the age of 20. Finally, #26 is reserved for beloved chef and television presenter Anthony Bourdain, who died in June. His Wikipedia article describes him as one of the most influential chefs in the world, and his traveling television shows are credited with creating unique windows into history, people, and cultures.[1]

Celebrity marriages also seemed to captivate Wikipedia’s readers in 2018. Meghan Markle, who married the British monarchy’s Prince Harry this year, came in at #5. She was followed by Ariana Grande at #25, whose brief engagement to comedian Pete Davidson was the subject of much tabloid attention, and Priyanka Chopra at #30, who married singer Nick Jonas.

The second major topic of 2018 on Wikipedia was film and television. Worthy of special mention is the Marvel superhero film universe, whose blockbuster part one capstone Avengers: Infinity War grossed over two billion dollars and was Wikipedia’s third-most-popular article of the year. It was followed by Black Panther (#7), which Rotten Tomatoes credited with “elevat[ing] superhero cinema to thrilling new heights,” and the list of films in the Marvel Cinematic Universe (#10). Also of note was A Quiet Place, #23 on our list, which was a surprise breakout hit and a seemingly rare success story for original film material. The film, nearly unique for using almost no dialogue, made over $340 million.

Finally, from the world of football, Wikipedia’s article about the 2018 World Cup was subjected to over 34 million pageviews in 2018—enough to make it the second-most viewed Wikipedia article of 2018. Two of the sport’s superstars, Cristiano Ronaldo and Lionel Messi, also placed highly.

Here’s the top thirty most-popular English Wikipedia articles of 2018.[2] Our grateful thanks go to researcher Andrew West for collating the data. 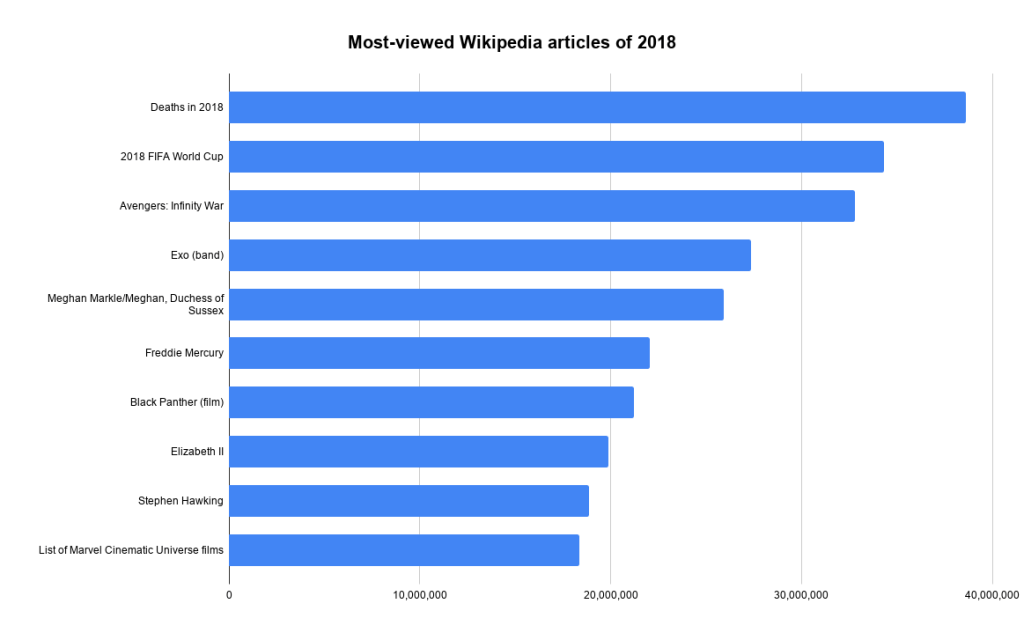 This data is complete for the entire year of 2018. The most-viewed English Wikipedia articles of each week are available through the Top 25 Report, and the top 5000 most-popular articles of 2018 are available on Wikipedia, courtesy of Andrew West.

Read more 2018, Most popular, Most read, Most viewed, Wikipedia, Wikipedia, Year in Review