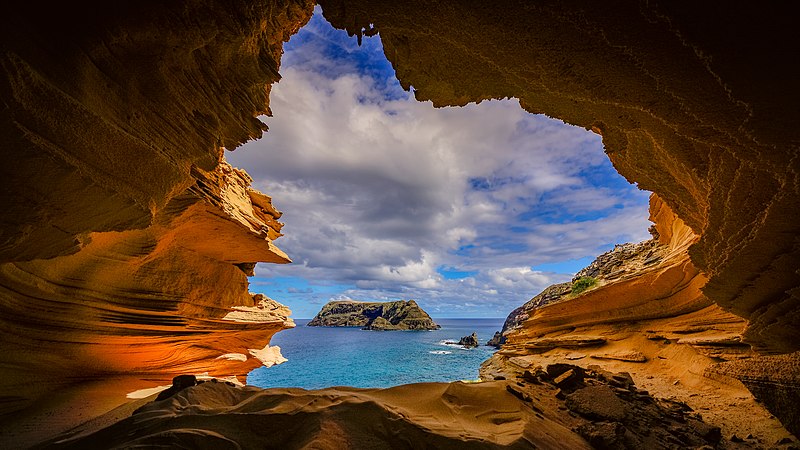 Think about that feeling you get when you are walking through pristine nature. Do you think it can be captured in a single photo?

The Wiki Loves Earth photography competition celebrates the world’s natural heritage, encompassing everything from small parks to massive nature reserves. It asks photographers to dive into those areas to pick out a little slice of nature, whether mundane or extraordinary, and share it with the world.

This year’s winner (seen above) comes from Portugal, where photographer Neide José Paixão framed Ilhéu de Cima through a cave entrance on a nearby island. “The dramatic colors and composition makes one imagine a movie scene,” a contest judge wrote.

Wiki Loves Earth began nine years ago and has been organized by volunteers with support of Wikimedia Ukraine each year since then. This year’s contest was the largest ever in terms of countries participating (39), and over 4,000 people ended up submitting over 50,000 photos. Of all those photos, 427 were selected at the country level in two categories (landscapes and macro/close-up) to be judged in the international contest.

All of the photos had to be uploaded to Wikimedia Commons, a free-licensed media repository with content that can be used by anyone in the world with few restrictions.

Second place: This photo of flamingos in their native Turkish wetlands represented all of the themes of the contest, ranging from the birds in the foreground, the mountains in the back, and the wetlands in between. This is the first of two photos that User:Ramazancirakoglu submitted that landed in the top 20 of this year’s Wiki Loves Earth international competition (#2, #19).

Third place: Indonesia’s Padar Island shines in this image that rewards viewers who click through to examine the mountain peaks, the bays, the humans, and the boats in detail.

Fourth place: This photo is a kinetic moment stuck in time. Acclaimed by one contest judge for its technical quality, this snapshot of the dramatic death of a fly at the hands of a preying chameleon in Turkey’s Kapıçam National Park was one of three images by User:Mkrc85 to place in the top 20 (#4, #10, #14).

Fifth place: Single combat has always been a fertile ground for storytelling, and that holds true in this action-oriented image of two battling Garrano horses in a Portuguese national park. This photo was the favorite of at least two contest judges, with one saying it contained “action, story, scenery, and perfection,” and was one of three by photographer User:Norbertoe to place in this contest’s top 20 winners (#5, #11, #15).

Sixth place: Where do you begin to look in this photo? This camouflaged Santa Claus pygmy seahorse measures in at less than 3cm long.

Seventh place: The Philippines’ Minalungao National Park is known for the picturesque views given by the winding path and green waters of the Peñaranda River. This image takes those attributes, adds action through the paddling child, and bookends them with canyon walls.

Eighth place: This extreme close-up of a cuckoo wasp was captured within the Wittenberge-Rühstädter Elbniederung nature reserve in Germany and achieved by using digital tools to combine several images into one.

Ninth place: Coming to you from the United Arab Emirates’ Milehah Desert, this photo juxtaposed the location’s natural heritage with the humanity that patronizes it. “It really feels like the photographer got the most out of the location,” one contest judge said, as its “impressive setting … makes you want to go there.”

Tenth place: This frog is enjoying some spring weather in Kapıçam National Park, Turkey. A contest judge remarked that it looked like the frog was “about to become a prince again” with its flowers and a green glove.

Eleventh place: There are many similarities in this image to #5. They feature two animals locked in single combat, were taken by the same photographer, and were captured in the same national park in Portugal. However, this one features two ibexes somewhat precariously balanced on a rock outcropping.

Twelfth place: This image looks like it could have come from Mars, but it’s actually a shot of the nighttime sky over Lake Meke in Turkey.

Thirteenth place: This creative photograph juxtaposes a colorful seahorse with an equally colorful fan worm, all found at Mar Piccolo near Taranto, Italy.

Fourteenth place: This is User:Mkrc85’s second hungry chameleon to place within the top 20 images in this year’s Wiki Loves Earth—but this time the unfortunate prey is some variety of Caelifera, such as a grasshopper or cricket.

Fifteenth place: User:Norbertoe’s third and final image to place in the top 20 from this year’s Wiki Loves Earth found two ibexes perched on a high vantage point. It was lauded for its technical quality despite the amount of snow falling.

Seventeenth place: Sunsets are used often in art for the ethereal qualities they can bring to visual media, but those same qualities often make sunset photos the wrong choice for educational purposes like Wikipedia. Thankfully, for this photo that’s not the case—according to one contest judge, “the colors of the sunset help us better visualize the landscape.” This photo comes to us from the southwest coast of Portugal.

Eighteenth place: You might be thinking that this is the work of an abstract painter, but it’s actually an aerial photograph of a river and surrounding dunes from a popular park in northeastern Brazil.

Nineteenth place: A herd of buffalo are on the move, perhaps in search of better grazing grounds. This image from Ramazan Cirakoglu, their second in the top 20, was taken in the Hürmetçi Wetlands of Turkey. It was commended by the contest judges for the action and storytelling implied in the herd’s movement.

Want to know more about how this year’s winners were evaluated and selected? The full judge’s report will be made available on Wikimedia Commons; you can follow the project on social media to keep up with updates (Facebook, Instagram, Twitter).

By Ed Erhart, Communications Specialist at the Wikimedia Foundation

*Note: Please make sure to follow each image’s copyright tag. All of the images above, for instance, are available under the Creative Commons CC BY-SA 4.0 license, meaning that you are free to share them for any reason so long as you give credit to the photographer and release any derivative images under the same copyright license.

Lake Meke Under The Milky Way

Iberian Ibex in the snow