The Wikimedia Foundation is committed to eliminating knowledge access barriers. For much of the world, this is a very real and daily problem. The 2019 International Telecommunication Union report for digital development estimates that 4 out of 5 people living in less developed countries are not yet online.

Here’s a typical example for you: In Imbabura Province, in the mountains of northern Ecuador, 90% of the population is either indigenous or mestizo (meaning a mix of indigenous and European descent). The poverty level is high. Internet access is patchy. And yet they are using Wikipedia. How?

4 out of 5 people living in less developed countries, mostly in Africa as well as parts of the Middle East and South America, are not yet online.

Enter Kiwix. The Wikimedia Foundation began a partnership with Kiwix to make online content accessible for people without online access back in 2018. Using this free open-source software, an offline, editable version of Wikipedia can be stored on a modified TV.

At Yachay Tech University— yachay means “knowledge” in Quechua—two theoretical physics students downloaded Kiwix onto a free lightweight hardware called Raspberry Pi and hooked it up to an old TV.

It may not look as sleek as your laptop or smartphone, but it works. Using these converted TVs, people in Imbabura province who may not have a reliable internet connection can read and edit Wikipedia offline, uploading any changes to articles they make once they’re back online.

Since then, about a thousand people in the Ecuadorian Andes and Amazon rainforest have been able to access Wikipedia. Similar collaborations between Kiwix and the Wikimedia Foundation in Papua New Guinea, the Namib Desert, and Vanuatu have brought new users online in some of the most remote places on our planet. Going from zero to 1,000 users in a year represents incredible growth, and it’s an exciting sign that people everywhere are united by the same curiosity and desire to learn. 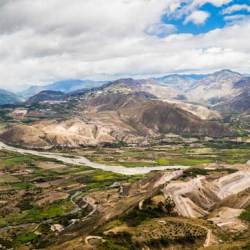