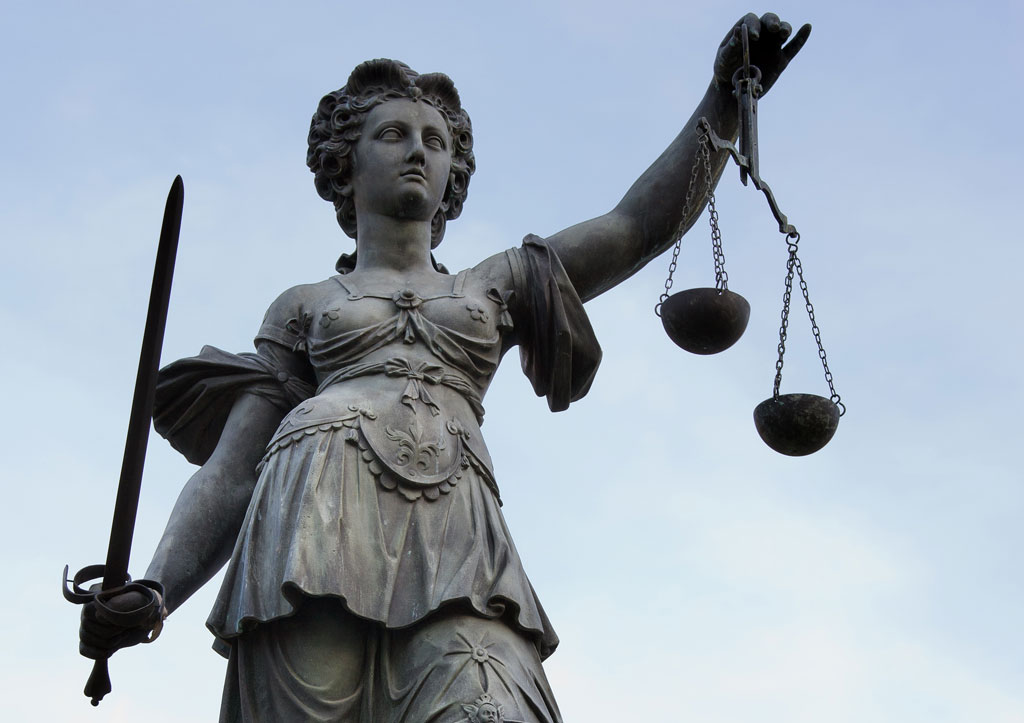 Justice presides with her scale and sword at Frankfurt am Main.
Photo by Roland Meinecke, licensed under a Free Art license.

Today, the Wikimedia Foundation is filing suit against the National Security Agency (NSA) and the Department of Justice (DOJ) of the United States. [1] The lawsuit challenges the NSA’s mass surveillance program, and specifically its large-scale search and seizure of internet communications — frequently referred to as “upstream” surveillance. Our aim in filing this suit is to end this mass surveillance program in order to protect the rights of our users around the world. We are joined by eight other organizations [2] and represented by the American Civil Liberties Union (ACLU). The full complaint can be found here.

“We’re filing suit today on behalf of our readers and editors everywhere,” said Jimmy Wales, founder of Wikipedia. “Surveillance erodes the original promise of the internet: an open space for collaboration and experimentation, and a place free from fear.”

Privacy is the bedrock of individual freedom. It is a universal right that sustains the freedoms of expression and association. These principles enable inquiry, dialogue, and creation and are central to Wikimedia’s vision of empowering everyone to share in the sum of all human knowledge. When they are endangered, our mission is threatened. If people look over their shoulders before searching, pause before contributing to controversial articles, or refrain from sharing verifiable but unpopular information, Wikimedia and the world are poorer for it.

When the 2013 public disclosures about the NSA’s activities revealed the vast scope of their  programs, the Wikimedia community was rightfully alarmed. In 2014, the Wikimedia Foundation began conversations with the ACLU about the possibility of filing suit against the NSA and other defendants on behalf of the Foundation, its staff, and its users.

Our case today challenges the NSA’s use of upstream surveillance conducted under the authority of the 2008 Foreign Intelligence Surveillance Act Amendments Act (FAA). Upstream surveillance taps the internet’s “backbone” to capture communications with “non-U.S. persons.” The FAA authorizes the collection of these communications if they fall into the broad category of “foreign intelligence information” that includes nearly any information that could be construed as relating to national security or foreign affairs. The program casts a vast net, and as a result, captures communications that are not connected to any “target,” or may be entirely domestic. This includes communications by our users and staff.

“By tapping the backbone of the internet, the NSA is straining the backbone of democracy,” said Lila Tretikov, executive director of the Wikimedia Foundation. “Wikipedia is founded on the freedoms of expression, inquiry, and information. By violating our users’ privacy, the NSA is threatening the intellectual freedom that is central to people’s ability to create and understand knowledge.”

The NSA has interpreted the FAA as offering free rein to define threats, identify targets, and monitor people, platforms, and infrastructure with little regard for probable cause or proportionality. We believe that the NSA’s current practices far exceed the already broad authority granted by the U.S. Congress through the FAA. Furthermore, we believe that these practices violate the U.S. Constitution’s First Amendment, which protects freedom of speech and association, and the Fourth Amendment, which protects against unreasonable search and seizure.

Additionally, we believe that the NSA’s practices and limited judicial review of those practices violate Article III of the U.S. Constitution. A specialized court, the Foreign Intelligence Surveillance Court (FISC), hears issues related to foreign intelligence requests, including surveillance. Under U.S. law, the role of the courts is to resolve “cases” or “controversies” — not to issue advisory opinions or interpret theoretical situations. In the context of upstream surveillance, FISC proceedings are not “cases.” There are no opposing parties and no actual “controversy” at stake. FISC merely reviews the legality of the government’s proposed procedures — the kind of advisory opinion that Article III was intended to restrict.

In 2013, the U.S. Supreme Court dismissed a previous challenge to the FAA, Amnesty v. Clapper, because the parties in that case were found to lack “standing.” Standing is an important legal concept that requires a party to show that they’ve suffered some kind of harm in order to file a lawsuit. The 2013 mass surveillance disclosures included a slide from a classified NSA presentation that made explicit reference to Wikipedia, using our global trademark. Because these disclosures revealed that the government specifically targeted Wikipedia and its users, we believe we have more than sufficient evidence to establish standing.

Wikipedia is the largest collaborative free knowledge resource in human history. It represents what we can achieve when we are open to possibility and unburdened by fear. Over the past fourteen years, Wikimedians have written more than 34 million articles in 288 different languages. Every month, this knowledge is accessed by nearly half a billion people from almost every country on earth. This dedicated global community of users is united by their passion for knowledge, their commitment to inquiry, and their dedication to the privacy and expression that makes Wikipedia possible. We file today on their behalf.

* The Wikimedia Foundation and its co-plaintiffs are being represented by the American Civil Liberties Union (ACLU) in this suit. We would like to thank them, in particular Patrick Toomey, Ashley Gorski, and Daniel Kahn Gillmor for their work and dedication throughout this process.

Q: What does this lawsuit challenge?
A: Our lawsuit challenges the NSA’s unfounded, large-scale search and seizure of internet communications, frequently referred to as “upstream” surveillance. Using upstream surveillance, the NSA intercepts virtually all internet communications flowing across the network of high-capacity cables, switches, and routers that make up the internet’s “backbone.” This backbone connects the Wikimedia global community of readers and contributors to Wikipedia and the other the Wikimedia projects.

Q: What is the U.S. government’s legal justification for this program?
A: The U.S. government has used the Foreign Intelligence Surveillance Act (FISA) Amendments Act of 2008 (FAA) (see 50 U.S.C. § 1881a) to justify broad, “upstream” mass surveillance. Under the FAA, “the Attorney General and the Director of National Intelligence may authorize jointly, for a period of up to one year from the effective date of the authorization, the targeting of [non-US] persons reasonably believed to be located outside the United States to acquire foreign intelligence information.” The statute only requires “reasonable belief” that a non-US person is located outside the United States. There is no need to show that target is a foreign agent, much less a terrorist. The purpose of the statute is to acquire “foreign intelligence information”– a very general concept. We believe the broad interpretation of this statute that allows for upstream surveillance is unconstitutional.

Q: How does surveillance or the fear of surveillance affect readers and editors of Wikipedia and its sister projects?
A: Mass surveillance is a threat to intellectual freedom and a spirit of inquiry, two of the driving forces behind Wikimedia. Wikipedia is written by people from around the world who often tackle difficult subjects. Very frequently they choose to remain anonymous, or pseudonymous. This allows them to freely create, contribute, and discover, without fear of reprisal. Surveillance might be used to reveal sensitive information, create a chilling effect to deter participation, or in extreme instances, identify individual users. Pervasive surveillance undermines the freedoms upon which Wikipedia and its communities are founded.

Q: How does surveillance affect Wikipedia as a knowledge resource?
A: Wikipedia is a living resource for knowledge. It is written by volunteers around the globe, in hundreds of languages. It reflects the world around us and changes to embodies current events, notable individuals, evolving theories, emerging art, and more. Wikipedia relies on the contributions of editors and the support of readers to evolve and grow. If readers and editors are deterred from participating in Wikipedia because of concerns about surveillance, the health of Wikipedia as a resource to the world is jeopardized.

Q: What kind of Wikimedia communications could the NSA be intercepting?
A: Wikipedia and its sister projects is created entirely by volunteer editors. More than 75,000 editors each month edit Wikipedia, amounting to more than 33 million articles. These editors not only contribute content, but also discuss and share information on discussion pages and elsewhere within the project. Privacy and free expression are core values of the Wikimedia community. When volunteer editors contribute to Wikipedia, they expect it to be a safe, open space in which creativity and knowledge can thrive.

Privacy makes freedom of expression possible, sustains freedom of inquiry, and allows for freedom of information and association. Knowledge flourishes where privacy is protected.

Q: Why is the NSA interested in the communications of innocent Wikimedia users?
A: You would have to ask them. One could guess, however, that they are trying to amass as much information as possible into their databases, and, as with other websites, they may believe there is value in the data, conversations, and personal information on Wikipedia and in the Wikimedia community.

Q: How do you know Wikimedia has been singled out for surveillance by the NSA?
A: One of the NSA documents revealed by whistle-blower Edward Snowden specifically identifies Wikipedia for surveillance alongside several other major websites like CNN.com, Gmail, and Facebook. The previously secret slide declares that monitoring these sites can allow NSA analysts to learn “nearly everything a typical user does on the Internet.”

Q: Has the Wikimedia Foundation taken any measures to protect its users’ privacy?
A: The Wikimedia Foundation takes privacy very seriously, which is why we find the NSA’s upstream mass surveillance so troubling. You do not need to create an account or login to read or edit Wikipedia or the other Wikimedia sites. If you do decide to create an account, you can choose any username you like — we don’t require real names, email addresses, or any other personally identifying information, and we never sell your data.

Q: Why did Wikimedia join this lawsuit against the NSA?
A: Our role at the Wikimedia Foundation is to protect Wikipedia, its sister projects, and the Wikimedia community of users. This means providing our users with the right conditions to facilitate their work, and protecting them when necessary. Defending the privacy of our editors, readers, and community is paramount to us. We believe privacy is essential to facilitating and advancing free knowledge.

You can also find this FAQ here on Wikimedia.org.