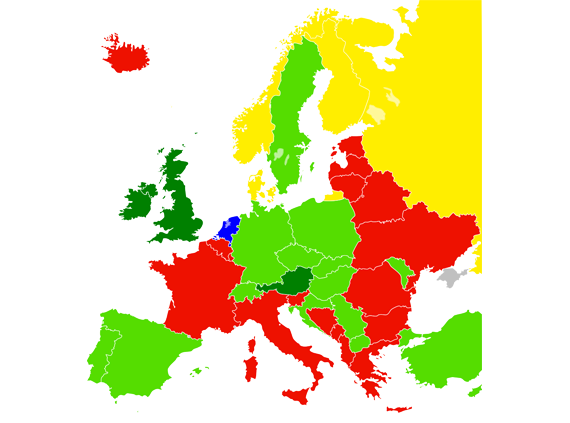 European copyright laws are very complex, as shown in this map: only countries highlighted in green allow taking pictures of buildings in public places -- a law known as "freedom of panorama". Free knowledge advocates are asking that all European Union countries adopt this law.

Last week, I visited Brussels to meet with members of the European Parliament (MEPs) and discuss copyright laws, from the perspective of a Wikimedia project editor. I met 9 MEPs, representing all Italian political groups (EFD, EPP, NI, S&D). All expressed support, and some long-term work collaborations were established.

During that time, the Industry, Research and Technology committee (ITRE) approved an opinion in strong support of the public domain, which among other things “calls on the Commission to explore the possibility of significantly shortening the duration of the harmonized terms of copyright protection.” It proposes a legal definition of ‘public domain’ works — to ensure that such works are protected against private appropriation through digitization or other means.

What I told the European Parliament

What did I tell MEPs? It was easy for me, because I don’t have to negotiate or represent anyone: our proposals and demands are all in the open; nothing is secret, since they can read all the details on our wikis. I just told them my story as Wikimedia volunteer contributor to thousands of Wikiquote and Wikipedia articles; I also shared the stories of other editors I know through the network of our association, Wikimedia Italia.

The perspective I tend to give is one of an author of freely licensed content. This helps further two underlying principles at the core of copyright reform.

How we got here

The office used by Wikimedians in Brussels. Photo by Dimitar Dimitrov, freely licensed under CC BY-SA 3.0.

Wikimedia Italia started its first copyright reform campaigns in 2007. Recently, we sent our own response to the 2014 European Union copyright consultation, stressing issues we faced — such as with Wiki Loves Monuments and digitizing books in Italy. Several other volunteer chapter members in Europe helped with similar documents. The consultation seemed to reach a dead end, as it proved that current laws are unbalanced but there was no energy to change their underlying paradigm.

Things changed in 2015. After the new European Commission made copyright reform a priority, the European Parliament took the lead in summarizing the situation and the way ahead: a non-binding report drafted by Julia Reda is being discussed in the European Parliament committees and will be voted on by some committees this week. The draft comes from a “minority” of the Parliament, but is just common sense — and it managed to put all real issues and possible solutions on the table, opening a wide discussion in institutions.

This time we are ready, thanks to the support of Dimitar Dimitrov for the EU policy initiative (see his earlier blog post, The Twilight of Copyright). Many groups have agreed on two clear demands: universal freedom of panorama (FOP) and public domain for works created by public sector employees (PD-Gov). So we don’t feel alone. Dimitar has been particularly helpful because he monitors the process continuously from Brussels , and alerts us when we can help.

For Wikimedia Italia and many other “weasels”, this is a volunteer activity: motivation is key. Last February, Dimitar asked us to pick up the phone and call a MEP to get their attention and point them to our position statement; that sounded easy enough: why not do it, if just a few minutes on the phone can make the difference? I started calling and I kept track of that work on our wiki, so all chapter members could check and have their say. I was happy to discover that many MEPs were happy to talk with a citizen like me: about 20 answered my calls, from all Italian political groups. Turns out the European Parliament is full of people who care and who are happy to listen to someone other than the usual professional corporate lobbyists.

Given the positive response from Italian MEPs, Dimitar suggested that I join him in Brussels for a week, as the first “visiting weasel”. Once again, I was unable to refuse, and was happy to make the trip: after all, a flight from Milan to Brussels costs less than 100 Euros — and it’s a good investment compared to the years spent talking to the Italian governors, who never gave us an answer. It was easy to get a handful of meetings scheduled and more half-confirmed. The transparency register offers a seamless accreditation system.

All views in this blog post are the author’s own; discussion is welcome in the comments section below.