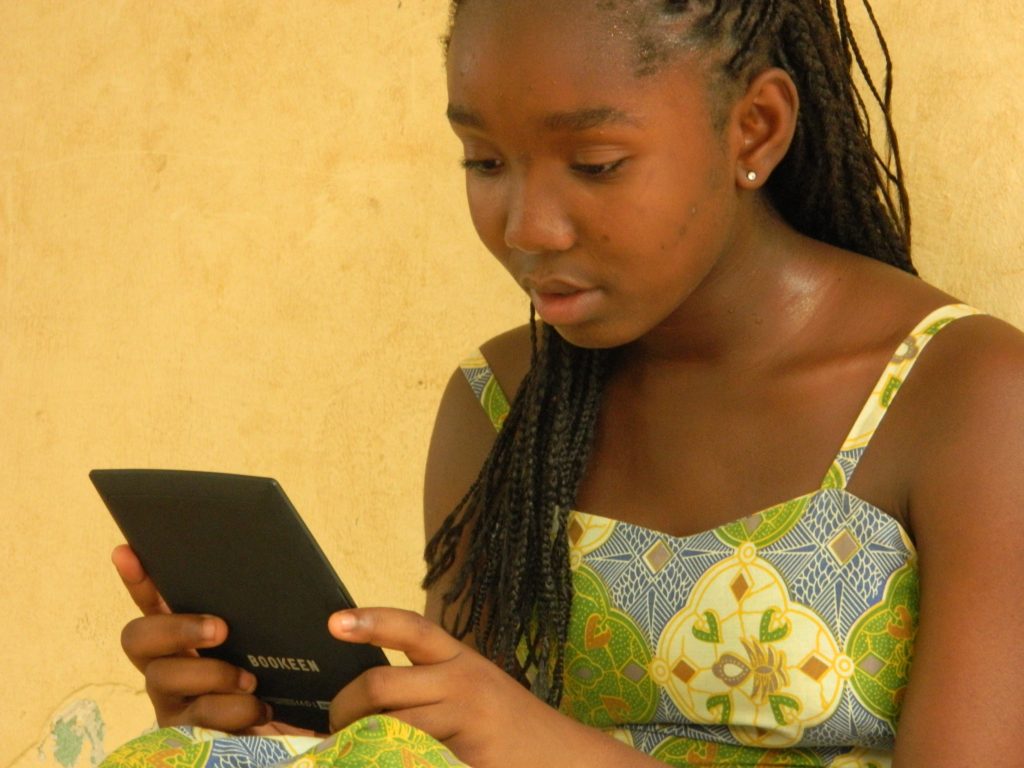 Malebooks e-readers provide an offline library to children in Mali, including the French version of Wikipedia and thousands of educational books. Sakina, a student in Bamako, reads « Le Petit Prince » on a Cybook e-reader from Bookeen. Photo by Renaud Gaudin, freely licensed under CC0 1.0.

The educational system in Mali is plagued by a lack of schools in rural areas, as well as shortages of teachers and materials. This has resulted in low rates for school enrollment, graduation and literacy — to the point that neighboring countries are reluctant to recognize diplomas from Mali. One of the main causes for this problem is the lack of books for children: only 0.4% of Mali’s children have books at home, according to the UNICEF.

To address this issue, the MALebooks project has been donating e-readers to schools in Mali since September 2014. The devices include the French version of Wikipedia and a collection of over 4,000 educational books. This experimental project is an initiative of Human’ESDES, a nonprofit association of French students in Lyon.

Many nonprofit organizations have donated books for educational purposes, but the costs, logistics and efforts required to collect and ship books to Mali are significant. Digital technology provides a far cheaper way to distribute content, and also offers several benefits: searchable content, integrated dictionary, font size customization, and the ability to store thousands of books on a single device.

The MALebooks e-readers include four types of content, all in French:

From a technical perspective, this project was made possible with the help of Wikimedia Switzerland and the Kiwix developers team. Kiwix is known for making the whole Wikipedia available on computers or mobile phones without Internet access. Now, MALebooks can also be browsed on Cybooks e-readers, thanks to a collaboration with manufacturer Bookeen. People involved in the Kiwix project also helped create the software tools necessary to create the public domain offline library, based on their work to create an offline version of the Gutenberg project.

Deployments started in September 2014 and the first stage of the project has now been successfully completed. MALebooks organized the following events to present their e-books, in collaboration with the French embassy in Bamako, the Institut Français as well as Jokkolabs:

The MALebooks project will be evaluated after six months, to measure the interest shown in the distributed e-readers. The first reactions have been positive so far. After a set of e-readers were delivered at the University of Bamako, Bakary Casimir Coulibaly, the secretary of the Commission Nationale des Cultures Africaines et de la Francophonie (CNCAF), stated that the e-readers were useful, precious — and, moreover, could make up for the insufficient libraries in schools and universities. Preliminary findings show that every single recipient said they learned something new with the devices — such as learning about history or other cultures.

Several nonprofit organizations have expressed interest in the MALebooks project in general, and in the offline use of Wikipedia on e-readers in particular. Most of them are waiting for the results of the six-month pilot; the USAID has already replicated the project (with minor adjustments) with about 550 devices in the Timbuktu region, through its Office of Transition Initiative. Furthermore, Wikimedia Switzerland is also considering a proposal for e-readers with offline educational content (e.g. Wikipedia, Wikiversity, Gutenberg library) through an online shop.