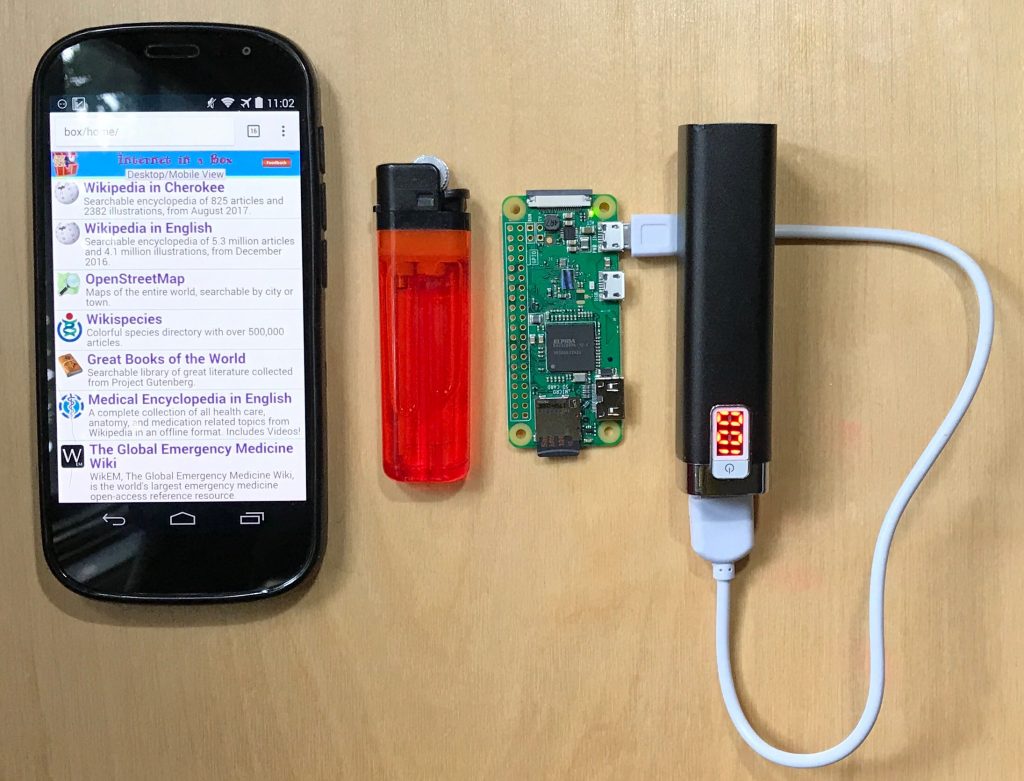 An Internet-in-a-Box from Schoolserver.org is running on a Raspberry Pi Zero W, powered by a small USB battery. A butane lighter is placed for scale.

Over the coming months, Anne will be interviewing people who work to remove access barriers for people across the world. In this installment, she interviews Dr. Samuel Zidovetzki, an emergency department physician normally based out of New York City. Sometimes, his work in global health takes him around the world, including to remote locations such as refugee camps where infrastructure like internet and electricity may not be reliable. Dr. Zidovetzki has been working with the WikiMedicine Project and using Internet in a Box to support his work with these patients.

First, can you share about how you’ve been using Wikipedia offline in your work?

Wikipedia offline has been the major resource present on the internet-in-a-box devices which I have been studying in various clinical settings as well as using personally in my own practice. I am an emergency department physician working in New York City. Additionally I specialize in global health, meaning that my work takes me from busy inner city emergency rooms to refugee camps in Greece taking care of desperate Syrian refugees with various degrees of medically complex complaints. Offline Wikipedia and WikiMedicine have been extremely useful in my work both clinically both with patient care and medical education. Education is a big component of the what makes offline Wikipedia useful as it allows me to conduct real time training and education with my medical students and residents as they see patients and learn about clinical medicine.

Another interesting avenue for the internet-in-a-box is using it as a platform for an electronic medical record which would make it easier to keep track of patients in austere settings d more appropriately allocate resources to target the medical needs of the community.

How did you get involved with the WikiMedicine Project?

My involvement with the WikiMedicine project was very fortuitous as it involved several pieces of a larger puzzle coming together. One of my colleagues at Mount Sinai, Ramona Sunderwirth, an experienced global health practitioner is friends with Anne Nelson, an accomplished journalist and faculty member at Columbia University. Anne Nelson had been working with the Internet-in-a-box device with James Heilman for educational purposes and I was then brought into the project to apply these offline resources with providers and educators in a medical setting.

What are the strengths of using Wikipedia on a Raspberry Pi in the field? Why is this better than alternatives?

The strengths of using Wikipedia on a Raspberry Pi is that it requires no data usage, processing speed or internal storage. One of our early needs assessments concluded that physicians in the Dominican Republic in certain settings had no access to the internet yet had smartphones. The internet was either restricted because the provider could not afford to purchase a data plan or there was simply no coverage in the area. In these situations, being able to connect wirelessly without cost to a high quality medical resource was very appealing to the providers surveyed. Additionally Western providers in austere settings are used to connecting to resources such as Wikipedia in their clinical practice. The ability to have immediate wifi access to several clinical resources is a definite advantage to improving patient care and provider comfort.

When I was in clinic in the DR, local providers were looking at Urinalysis for the purpose of determining urinary tract infections exclusively when someone had complaints of urinary urgency or frequency. With the help of the device, providers learned how to use the Urinalysis to look at whether a patient was dehydrated or whether they had early signs of diabetes. On at least one occasion, the device was used to council a patient on seeking diabetes screening and placing them on life saving medications in the long term. In a refugee camp, a patient came in with an elbow dislocation, I hadn’t reduced one in a long time so I watched a video on WikiMedicine to remind myself how to reduce an elbow and did it successfully. A patient came in with a scorpion bite and was terrified, the Wiki-article on scorpion bites allowed the provider to determine that the bite was non lethal and the patient was counseled appropriately. A supremely stressful event for the patient was averted because of the information on the device.

What are the weaknesses of using it?

As with most new technology, there are several kinks which need to be worked out with the offline Wikipedia usage and internet-in-a-box in general. Searchability across different applications seems to be a constant issue brought up by users which is being worked on by the technical team behind the internet-in-a-box device. Connecting to the device and disconnecting from the device to use data can be cumbersome and an easier way to toggle between WiFi connections would be beneficial. In general however, having additional resources is never really a weakness, when it comes to high quality medical resources, the more the merrier.

Since you’ve been on the ground, what do you see as the greatest potential for these devices?

The internet-in-a-box device is a very exciting delivery mechanism for resources aimed at improving patient care and helping providers deal with austere settings. Helping providers who are used to a certain level of resource at their home institutions feel comfortable when they are abroad is perhaps the greatest potential for this device. I envision providers working in refugee camps or rural clinics without any internet coverage who are able to have at their fingertips the same resources they were accustomed to referencing back home such as local protocols, Wikipedia, and various paid medical resources and literature. This device would include fully searchable content, high quality, peer reviewed medical resources and a workable, referenceable Electronic Medical Record.

What does your involvement with offline Wikipedia look like going forward?

Slowly but surely, I have made offline Wikipedia the primary focus of my career and research and I plan to continue in that vein. I have conducted research, spoken at several international conferences and have used the device extensively both clinically and as a medical educator. I plan to be extensively involved with offline Wikipedia moving forward both abroad and at home as I step into my new role moving to the University of California at Riverside being involved in emergency resident education.

How do you think the Wikimedia Foundation can help?

The Wikimedia Foundation can be very helpful in supporting this project and supporting physician use of Wikipedia. The more offline Wikipedia is integrated into clinical care the more trusted and used a resource it has the potential to become.

Funding is always important and critically lacking in these endeavours. Funding can support dedicated computer developers,researchers and wikipedians to improve, revise and edit medical content in a large and concerted way. Several research projects involving clinical use of the device in various settings are being planned; Nigeria, Guatemala and Ethiopia however their success is in jeopardy because of lack of resources to fund some of these projects.

The Wikimedia Foundation could use its substantial reach to publicize the medical utility of offline Wikipedia and the efforts of our group to use Wikipedia to improve patient care and medical education. Additionally, there are several medical resources which would be wonderful to partner with and place on the internet-in-a-box device. While Wikipedia is a fantastic resource, it is not the only resource and using the Wikimedia Foundation to partner with local governments and other organizations to create a robust and inclusive medical portfolio on the Internet-in-a-box would be extremely helpful for this initiative. 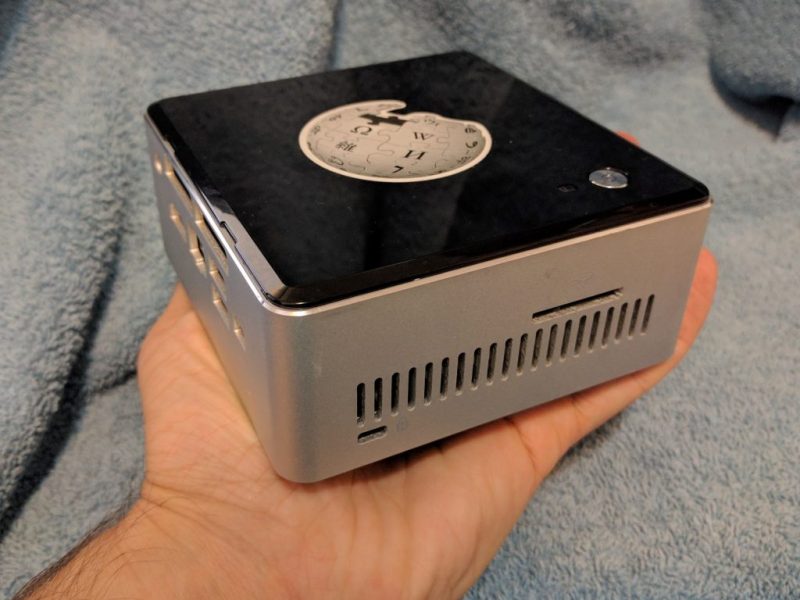 James Heilman on expanding the reach of Wikipedia’s medical information

A conversation with emergency room physician James Heilman, who is working to get medical information into Internet-in-a-Box—a physical device that provides Wikipedia and other content in areas without internet access.