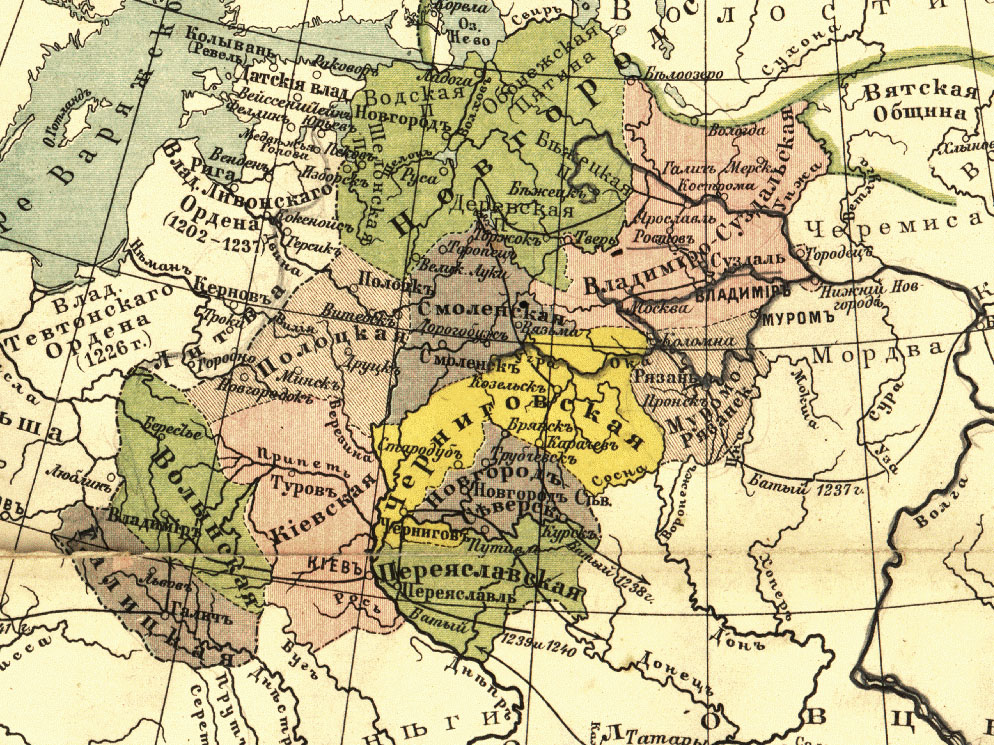 Imagine you needed to learn about a foreign land, but the only map you had was written in a mysterious script you couldn’t read. That might sound like a plot twist from some adventure story, but it’s actually the situation visitors to Wikimedia projects—including Wikipedia—often found themselves in until recently.

An extension called Kartographer enables Wikimedians to create interactive maps simply by supplying the longitude and latitude of a location. The service is powered by geographic data from the open-source mapping project OpenStreetMap. These Kartographer maps provide a valuable form of visual information, but until now they’ve suffered from a limitation common to most OpenStreetMap projects: maps were displayed in the language of the territory mapped, rather than in the reader’s language. The map of Asia below demonstrates the issue. To understand it fully, a reader would have to know no less than seven different writing systems.

Another problem with Kartographer maps was that until recently, the full service wasn’t available on most Wikipedias. Editors on these wikis could link to interactive maps, but they lacked the “mapframe” feature that lets you embed maps right on a page.

In 2017, the maps user community rallied behind a proposal in the Community Wishlist Survey that requested Kartographer Improvements, making this the most voted-for Wishlist item of the year. The proposal’s main wish was to fix Kartographer so that maps display in the language of the reader.  In January of this year, the Foundation’s Collaboration team got the assignment to address this and other issues with Kartographer, and the Map improvements 2018 project was born.

Revamping Kartographer so it displays maps in virtually every script and language on the planet was a significant challenge—I’m told there is no other mapping service that even tries. But after a lot of painstaking work, last month the maps community got its wish with the release of “map internationalization.”  At the same time, the Map Improvements project delivered the ability to embed maps on a wiki page to the 277 Wikipedias that didn’t have the feature previously, including English Wikipedia. Now, maps like the one below—which no longer shows a babel of languages and alphabets—can be displayed on almost all Wikimedia wikis.*

In the weeks since we released internationalized maps to all wiki projects, users have already placed more than 60,000 new mapframe maps on wiki pages.  These large numbers are possible because of templates, which volunteers can code to pull geo coordinates from Wikidata automatically and generate maps on hundreds or even thousands of pages at once. To cite a few examples, looking only at Wikipedias that didn’t have mapframe previously: Koreans now use mapframe to show the location of metro stations, Italians are mapping football stadiums (see illustration), English Wikipedians are tracing roads, and Bengalis are pinpointing the sites of American universities.

That users are spreading interactive maps around the wikis in large numbers isn’t a surprise, since they offer many advantages. As demonstrated by the template examples just cited, mapframe maps are easier to generate than previous locator maps, which had to be created as graphics and uploaded individually. They provide more information to readers, since clicking on a mapframe map pops it up in a larger window where it can be zoomed and panned to show detail or context. And, of course, dynamic maps are less likely to become outdated as borders, place names and page layouts change.

Like Wikipedia, OpenStreetMap (OSM) is an open-source project, which means that its map data, including name data, are created  by volunteers. What names are available in which languages varies considerably from language to language and place to place. In general, the names of countries, states, provinces and major cities are present in many languages, while smaller towns and geographic features may or may not be available in the language you want. The table below shows the relative strengths of “multilingual name data,” as it’s known, in the 25 most widely available OSM languages.

With internationalization, Kartographer tries to present maps in the content language of the wiki where the map appears. When the software encounters a place or other map feature for which it can’t find a name in the desired language, it falls back as gracefully as possible: first to languages configured as fallbacks for the requested language, then to any transliterated names in the same script, and finally to the language of the territory mapped. 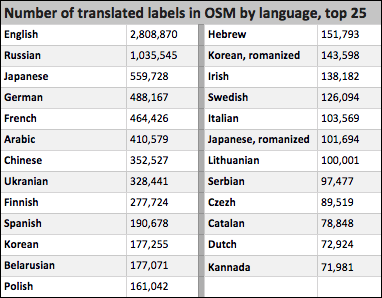 Availability of multilingual data in OpenStreetMap varies considerably from language to language. The more “translations” there are in a language, the higher the likelihood that a given map feature will display in that language. (Data from OSM, April, 2018.) Image by Joe Matazzoni, CC BY-SA 4.0.

This system works better in some situations than others. When the results are unsatisfactory, there are a few things you can do:

The Map Improvements 2018 project page includes a number of posts that detail the hows and whys of these various approach, including: this post and this one, on the uses of lang=”local”; and this one about why some wikis might want to change their fallback languages. 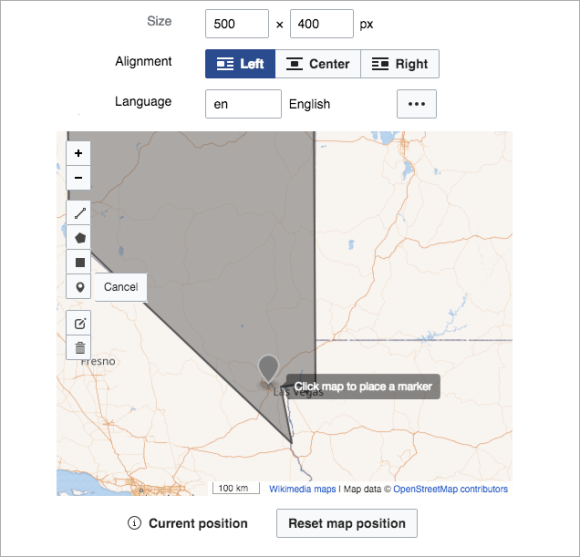 Put your project on the map

The Map Improvements 2018 engagement comes to a conclusion at the end of June. Besides the internationalization features we’ve been talking about and some other necessary fixes to the user experience, a big focus of the project was modernizing and upgrading the Kartographer software so that the Reading Engineering team can maintain the technology going forward (here is the newly created Wikimedia Maps project page, where users will track and discuss that ongoing work).

If you typically work on one of the 277 Wikipedias that never had embedded mapframe maps before, it’s pretty easy to try these new features out. Visual Editor offers tools for creating  basic maps (see the illustration). A newly rewritten Kartographer Help page explains the Visual Editor features and demonstrates more advanced annotation and other capabilities.

It’s a wide world out there and mapping is a great way to explore and understand it a little better. Here’s hoping that these new feature encourage some of you to do just that.

*The exceptions are nine wikis that use a strict version of Flagged Revisions.

Joe Matazzoni is a product manager at the Wikimedia Foundation. The Map Improvements 2018 project couldn’t have been successful without generous advice and programming contributions from map-loving volunteers, including Yurik, framawiki, Naveenpf, TheDJ, Milu92, Atsirlin, Evad37, Pigsonthewing, Mike Peel, eranroz, Gareth and Abbe98. Thanks to them and everyone else who lent their hands to this work.

This blog post was edited on 9 July to include a mention of OpenStreetMap’s best practices.