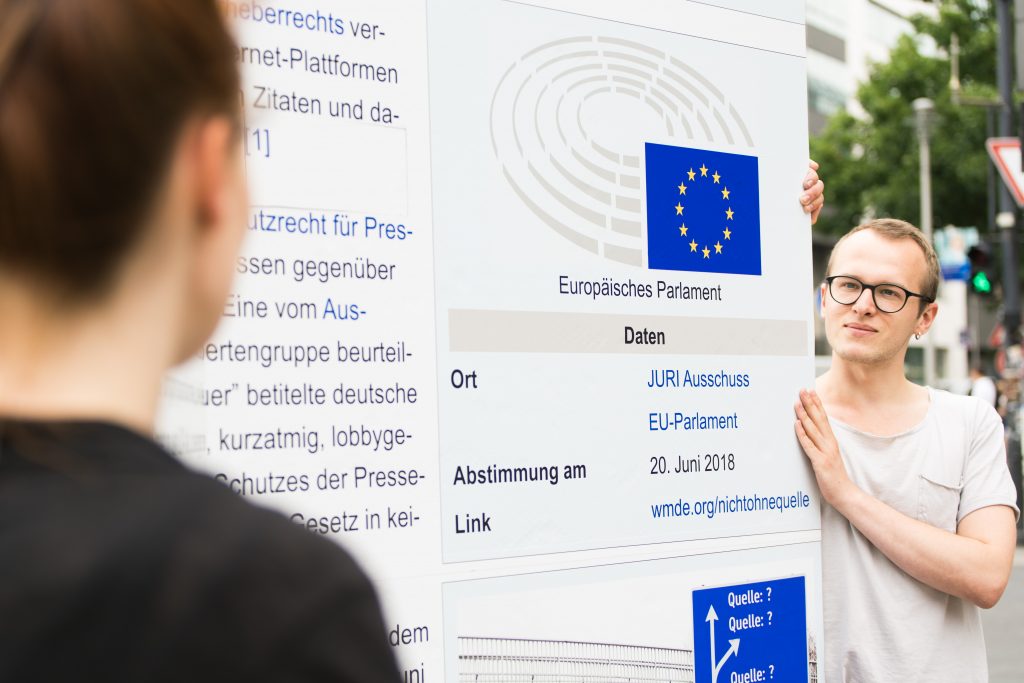 On 5 July, Members of the European Parliament (MEPs) rejected a flawed proposal for an EU Copyright Directive that would have had detrimental effects to internet freedom, access to knowledge, and collaboration online. The Wikimedia Foundation applauds the results of this vote and the opportunity it offers for a wider discussion to create a balanced, modern copyright system for Europe. The vote today means that the text of the draft Directive will be open again for amendments to be proposed and voted on by Parliament, likely at the next plenary session on September 13, 2018.

In the past week, the Wikimedia Foundation Board of Trustees, more than ten Wikipedia language communities, and many Wikimedia chapters in Europe took a stand against the draft Directive before the July 5th vote. Some Wikimedians even took to the streets to protest. Basque, Bulgarian, Catalan, English, Estonian, Galician, German, Hungarian, Italian, Latvian, Polish, Portuguese, Slovenian, and Spanish Wikipedia’s ran messages asking European users to contact their MEPs or went dark for a day to protest the proposal.

Unlike other online platforms, Wikipedia’s global community of volunteer editors makes decisions about how they want the site to be involved in policy debates that impact Wikipedia, access to knowledge, and the free and open internet. Of course, the Wikimedia movement was not alone in our protest to the directive. We were joined by countless civil society stakeholders, technologists, creators, and human rights defenders who spoke out against the proposal.

The Wikimedia movement is built on respect for copyright and a belief that creativity and innovation can thrive with the help of a vibrant public domain. We believe strongly that the draft directive went too far to expand copyright and failed to provide critical protections for material that should be both free and public. We fear that the overbroad requirements in the draft directive would actually lead to further dominance of the internet by large companies that have the resources to build burdensome filtering systems. This runs contrary to the vision of an open internet that fostered Wikipedia’s creation.

Now that the proposed copyright directive will be open for amendments once again, it is time to support improvements that harmonize copyright across the EU and preserve basic online freedoms.

A groundswell of concern over this proposal led to its rejection in Parliament. Let’s make sure that the next round of amendments takes these concerns into account and results in a copyright directive which will truly deliver a free and open internet for all. You can learn more about next steps for the EU Copyright proposal and how to get involved at saveyourinternet.eu.