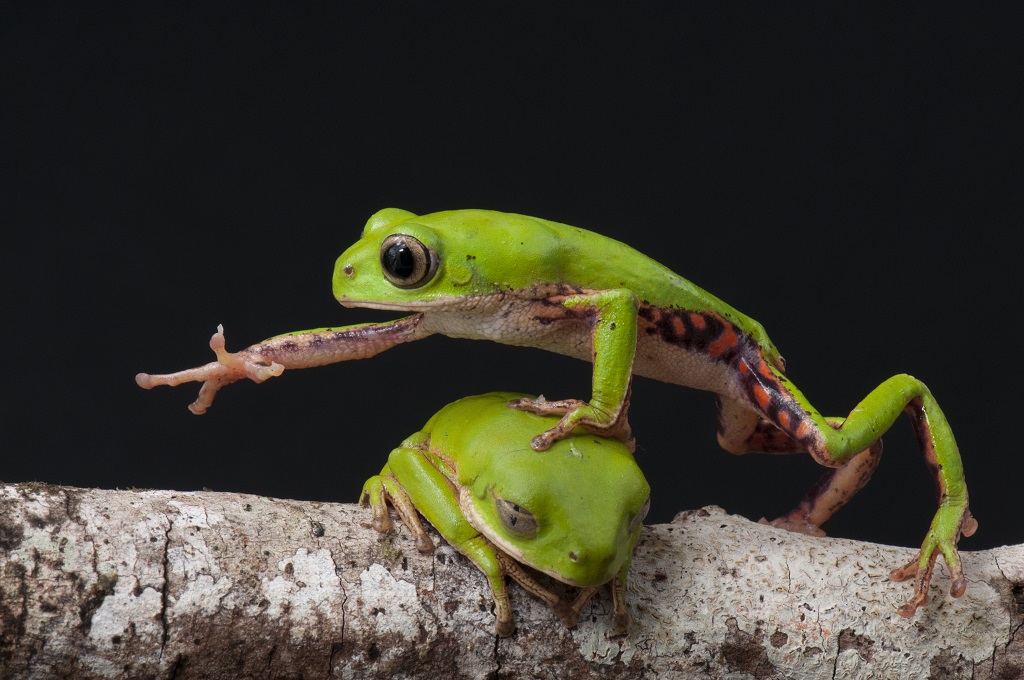 How about ribbeting? Toadally awesome? (Please frogive us.)

Whichever frog pun (or caption) you choose to label it with, the photo above is this year’s Wikimedia Commons picture of the year. It features two Phyllomedusa rohdei, frogs endemic to Brazil, with one stepping on the other’s head, seemingly reaching for something just out of the frame.

The photo was taken by biologist Renato Augusto Martins, and came in tenth place in last year’s Wiki Loves Earth photographic competition. He told us that he found these two in the Atlantic Forest in Bahia, Brazil:

On an afternoon of work, I heard some males of the tree frogs … singing, and because I knew it was such a beautiful species and quite hard to be found, I looked for them and tried record that moment.

When I found these two male frogs, I prepared my photographic kit and while I was taking a photo, one of them began to walk vaguely towards his opponent.

The process of taking these pictures is easy and complex at the same time: I used a 105mm macro lens to get quality on my approaching (which was very slowly). To brighten the whole picture, only a flash light would not be enough, so I got some help from my friends with 3 light reflectors, bringing lots of light on the main object and leaving the background distant – like plants and branches. Making some essential configuration changes on the machine settings, we can leave a very black and consistent background, highlighting what we want to.

I believe that this picture stood out in the eyes of the voters because the image shows action and beauty in one click, one can tell and imagine stories with it. Even though they are such small amphibian, these frogs are colorful and beautiful, spreading elegance, lightness and movement!

In second place was Janepop’s stunning photo of the royal pavilion in Thailand’s Khao Sam Roi Yot National Park, obtained after a more than five hundred kilometer road trip with some friends. The photo also took second place in last year’s Wiki Loves Monuments competition, but we were unable to get in touch with them for more details for this article.

This computer-generated GIF cross-section of a beating human heart came in third place. Dr. Jana Cosa Nostra first started working on a version of this animation several years ago, making modifications based on feedback and further research:

Being a medical doctor from India, I had to do some additional research on the movement of the heart and to nail down the right time for the contraction of the right part of the heart. I also had to research some way to insert those values in the 3D software. I [had been using] 3D animation [software for] six years when I created it, so I had some jump start. Just the way we look at real life humans/animals while animating, I took the help of real-time MRI scans of patients for guidance.

To convey how the heart functions, the model is a valuable tool but I am sure that I haven’t even scratched the surface of how beautiful a real heart functions. It is very humbling that despite all the technological advances we can never create something so beautiful and intricate like a real heart, a heart which every one of us has and we take it for granted for it to function from our first breath to the last.

You can find more of Jana’s work over on his website, DocJana.com.

Check out the rest of this year's winners and others from past years. (This one's from 2014.)