The child of a monkey holds on to its mother tightly. A lone straw bale stands in a field prior to being collected. A few rays of sunlight filter into a dark, foreboding cave filled with clear blue water.

These are a mere three of the imagination-fueling winners from the international Wiki Loves Earth photography competition, whose results were announced today. The overall winner, seen above, shows a banded demoiselle hovering near a dandelion’s seedhead. It was praised by the contest’s selection committee for its composition, sharpness, and colors; one member called out the extraordinary detail visible on the damselfly’s wings.

Wiki Loves Earth focuses on “protected” areas, referring to places like nature reserves, landscape conservation areas, national parks—the unique locations that make up a large proportion of the world’s natural heritage. The contest asks photographers to contribute their work to Wikimedia Commons, a media repository which holds many of the photos used on Wikipedia and the Wikimedia ecosystem. All of the content on Commons is freely licensed, meaning that it can be used by anyone, for any purpose, often with only a minimum of restrictions.[1]

Organized since 2013, this year’s rendition of Wiki Loves Earth inspired over 95,000 photo uploads from thirty-seven countries, including at least one from every continent in the world (except Antarctica). All of the entries were judged by juries organized on the national level, and the winners from these were forwarded to an international jury/committee of experts which selected the images that you see above and below. You can read the report they produced over on Commons, or see past winners from 2018 and 2017.

First place photo, shown at the top of this page, by Sven Damerow, CC BY-SA 4.0.

Second place: A group of people walking through Hoggar National Park, Assekrem, Tamanrasset, Algeria. The members of the contest’s international journey called out this photo’s “magnificent color,” adding that capturing “the line of people versus the line of rock” was “very powerful.” This location was also featured in the fourth-place winner from Wiki Loves Earth 2018. Photo by Aboubakrhadnine, CC BY-SA 4.0.

Third place: A hillside full of flowers in Ukraine’s Carpathian National Park. One jury member stated that this was a “classical” image, while another pointed out that the positioning of the flowers leads a viewer’s eyes straight into the mountains behind. Photo by Mykhailo Remeniuk, CC BY-SA 4.0. 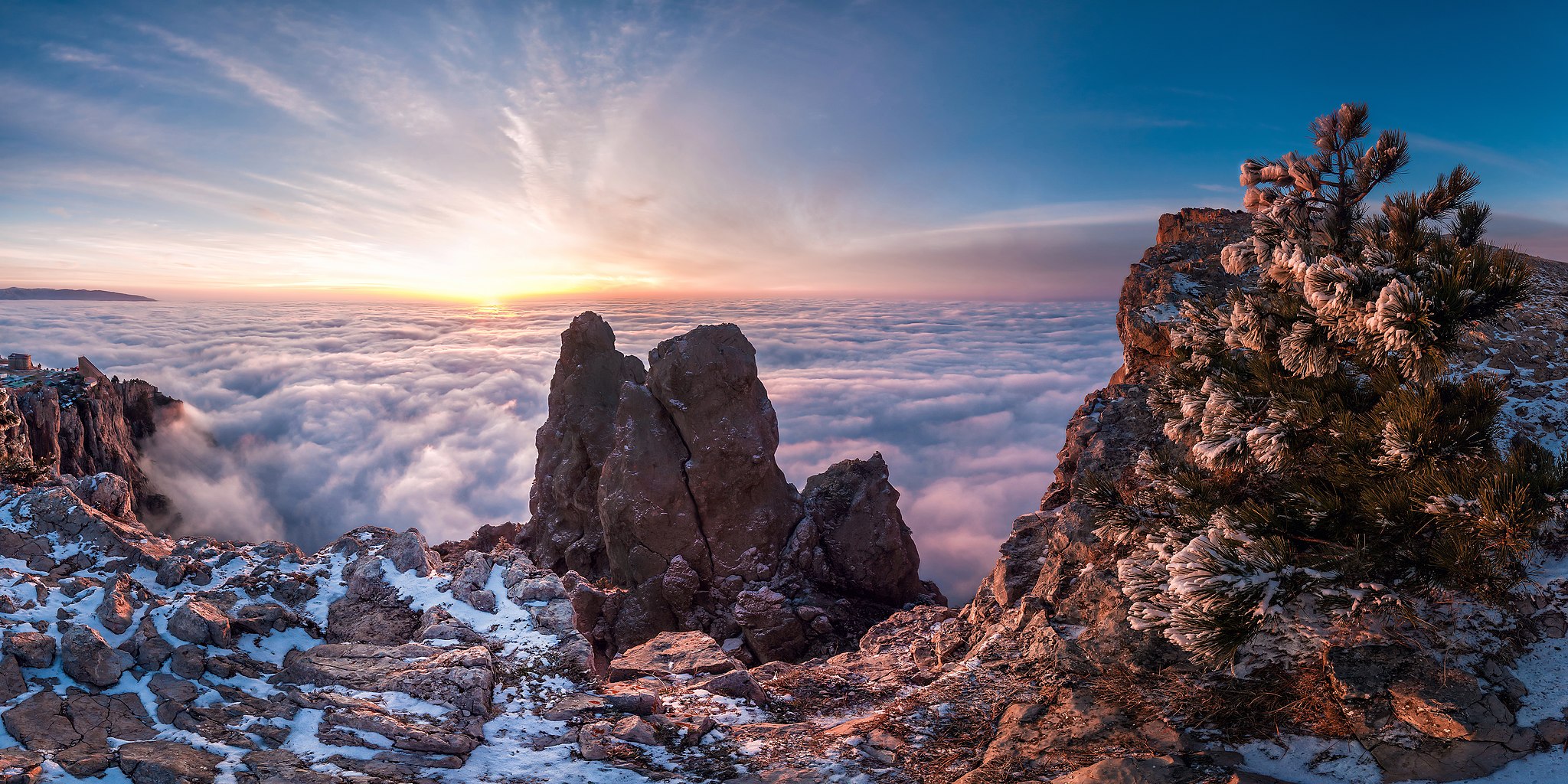 Fourth place: According to Wikipedia, the mountain Ai-Petri is “one of the windiest places in Crimea.” On this day, though, the wind could not blow away a swath of low-lying clouds, which gave photographer Dmytro Balkhovitin the perfect opportunity to capture this dawn-lit image. The jury was effusive in their praise for this image, with one calling it “magical,” and another marveling at the difficulty involved in getting to this particular location. Photo by Dmytro Balkhovitin, CC BY-SA 4.0. 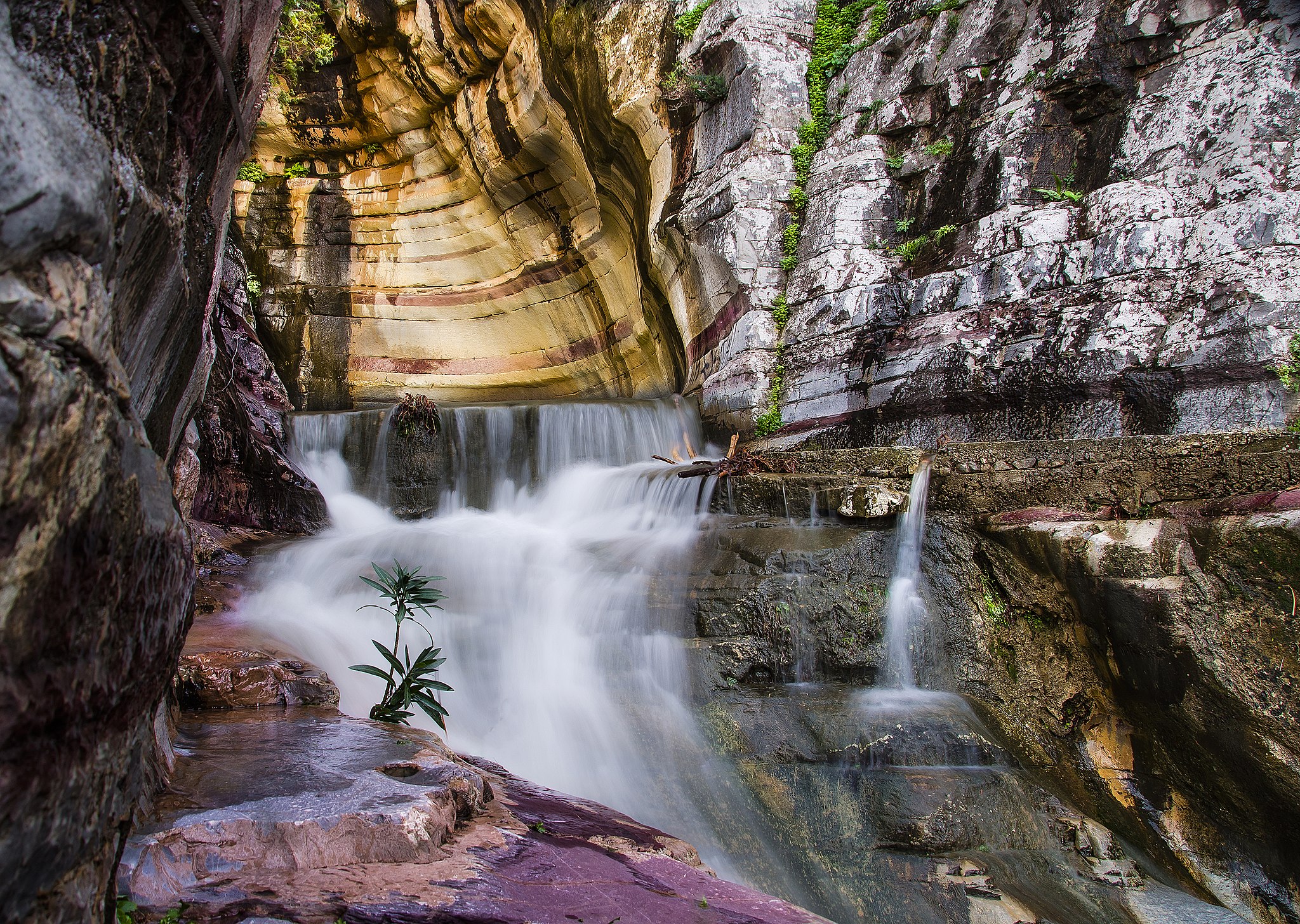 Fifth place: This is the formidable exit from Ha Gorge, a fissure that reaches a depth of about a thousand meters, or over three thousand feet, making it one of the largest in the world. It’s located on Crete, an island off the south coast of Greece. Photo by Andreas Loukakis (Andloukakis), CC BY-SA 4.0. 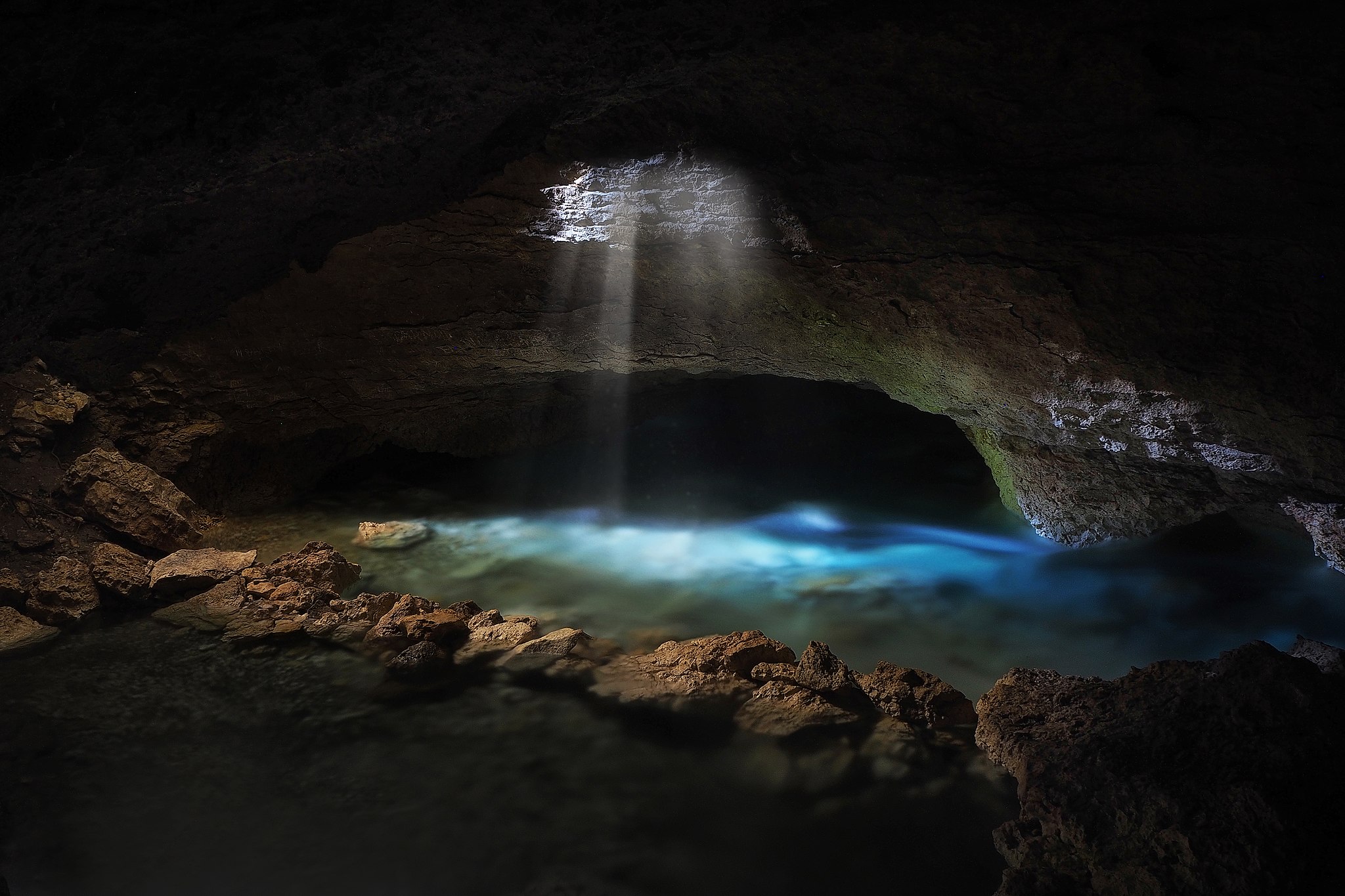 Sixth place: The Pulangi River is the fifth-largest river in the Philippines (and drains into the second largest). Here, though, you can barely see its size in this dimly lit underground cavern, named “Blue Water Cave” for reasons that this photo makes crystal clear. Photo by Glenn Palacio (Theglennpalacio), CC BY-SA 4.0. 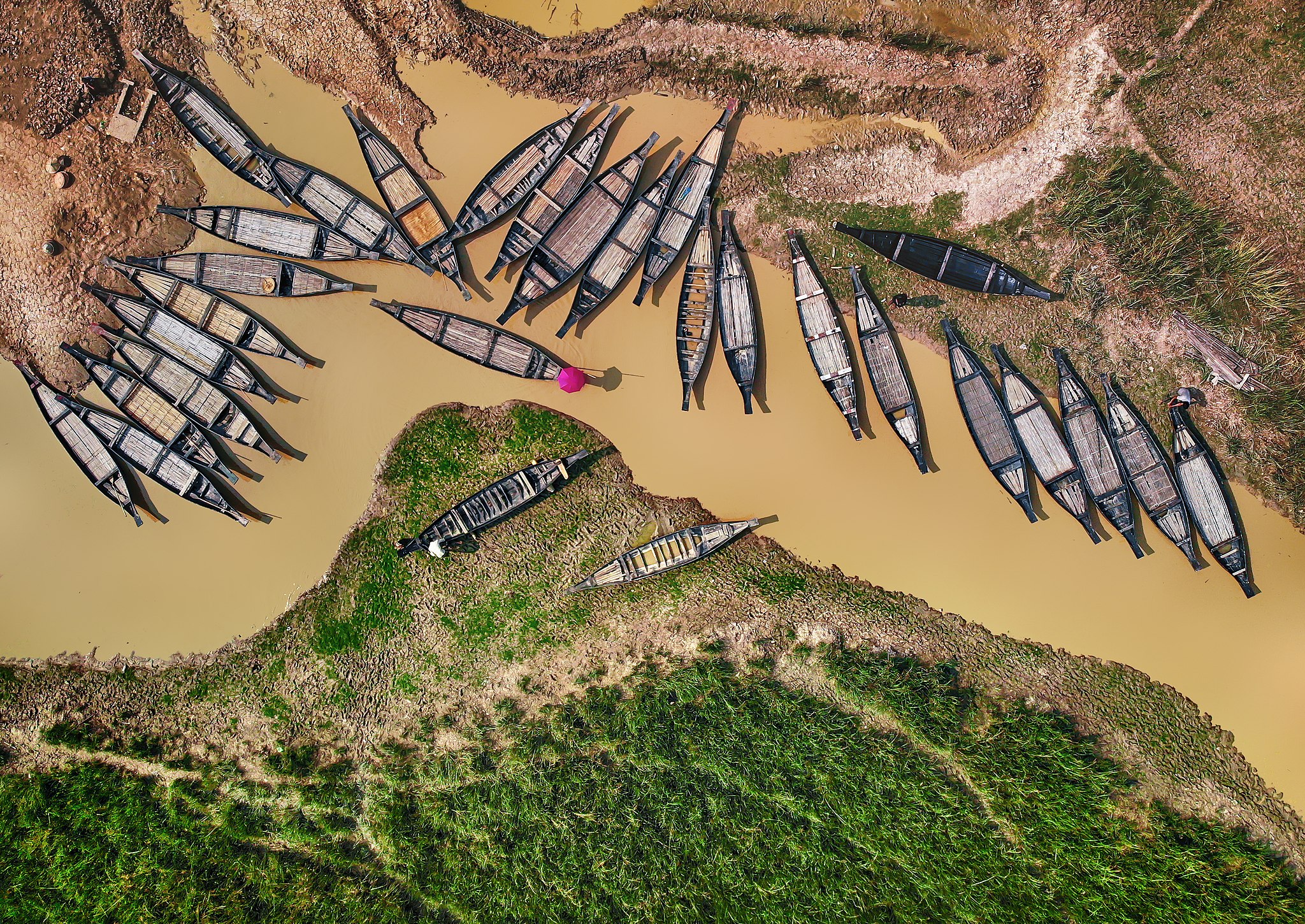 Seventh place: The Ratargul Swamp Forest is the only flooded forest in Bangladesh, and these boats are likely used to bring tourists in to view it. Photo by Abdul Momin (Abdulmominbd), CC BY-SA 4.0. 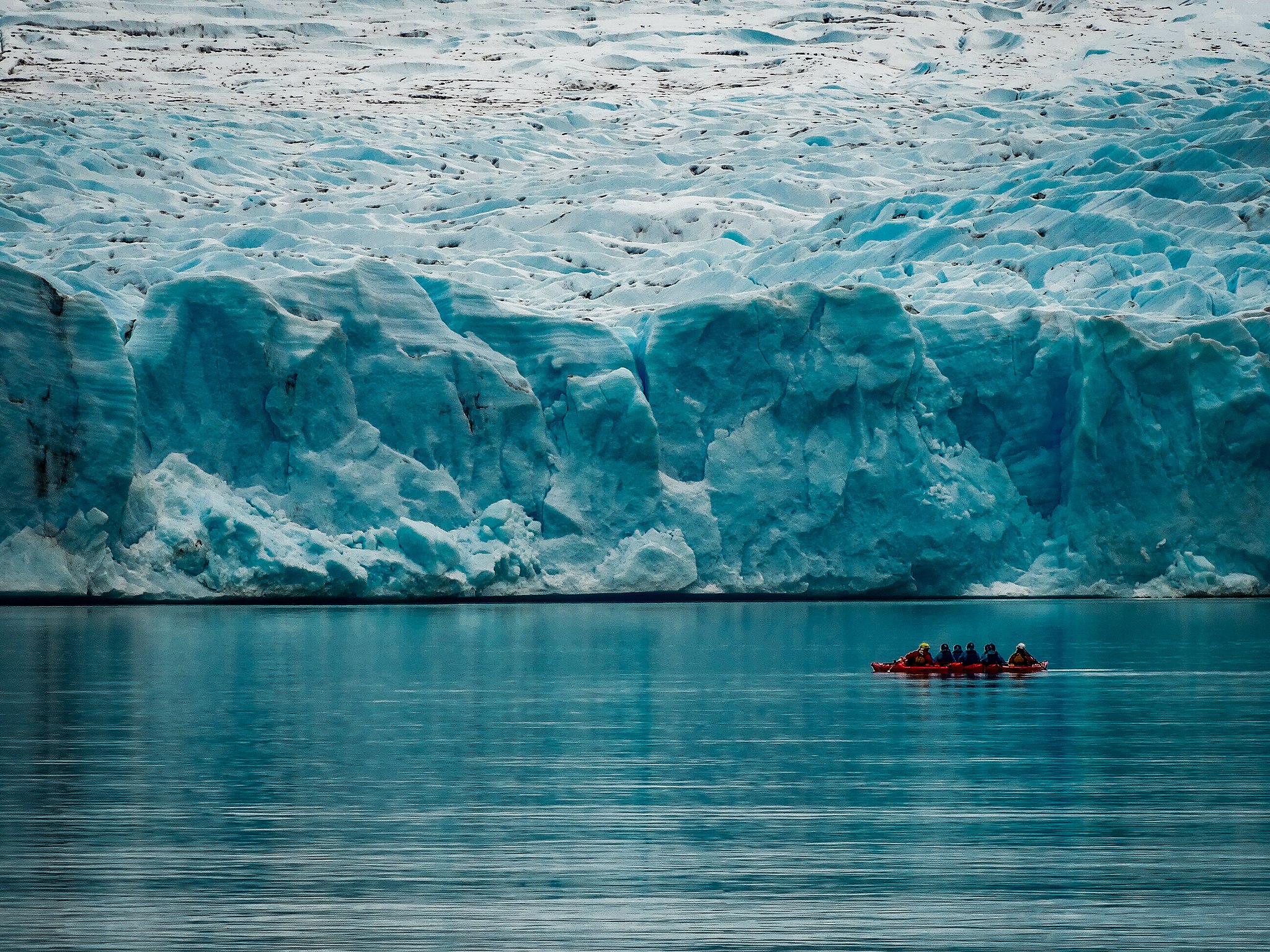 Eighth place: The Grey Glacier is located in southern Chile. In 1996, it could boast of being about 270 square kilometers in size (approximately 100 miles), but it has shrunk in the years since then, including one major split in 2017. One jury member praised how this photographer utilized the large “empty spaces.” Photo by Pablo A. Cumillaf, CC BY-SA 4.0. 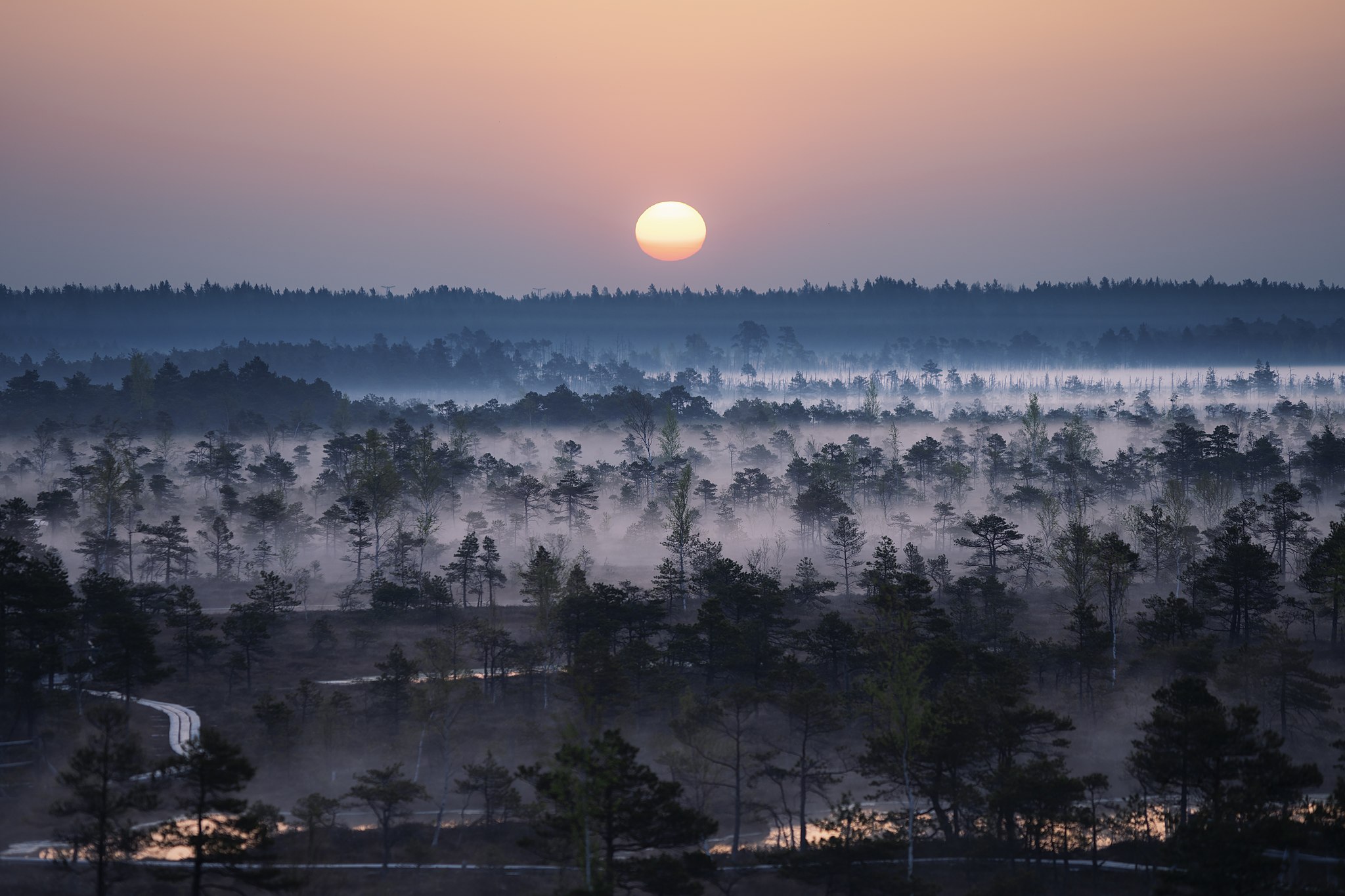 Ninth place: Looking like something out of Star Wars, this foggy morning at Ķemeri National Park in Latvia helps showcase the area’s bogs and forests as well as the man-made infrastructure that allows tourists to access it. One jury member commented that this photograph featured “a lovely mix of misty subdued colours with natural and man-made objects—making this a thought-provoking piece of art and not just a picture.” Photo by Volodya Voronin, CC BY-SA 4.0.

Tenth place: Two features dominate this drone-captured photo of Russia’s Teberda Nature Reserve: a furious river in the upper third, and the road’s switchbacks in the bottom two-thirds. One teasing comment from the jury suggested that this image could have benefited from a passing car—”perhaps a red Ferrari or a cattle truck on the first curve?”, they asked with an accompanying smile. Photo by Andrey Belavin (Ted.ns), CC BY-SA 4.0.

Eleventh place: Ostensibly, the subject of this photo is the gnarled old juniper tree located in the Zakaznik Novyi Svit nature reserve in Crimea. What brings this photo over the top, however, was the inclusion of the Milky Way in the background, complete with a shooting star or satellite in the upper central portion. Photo by Vladimir Voychuk (Войчук Владимир), CC BY-SA 4.0. 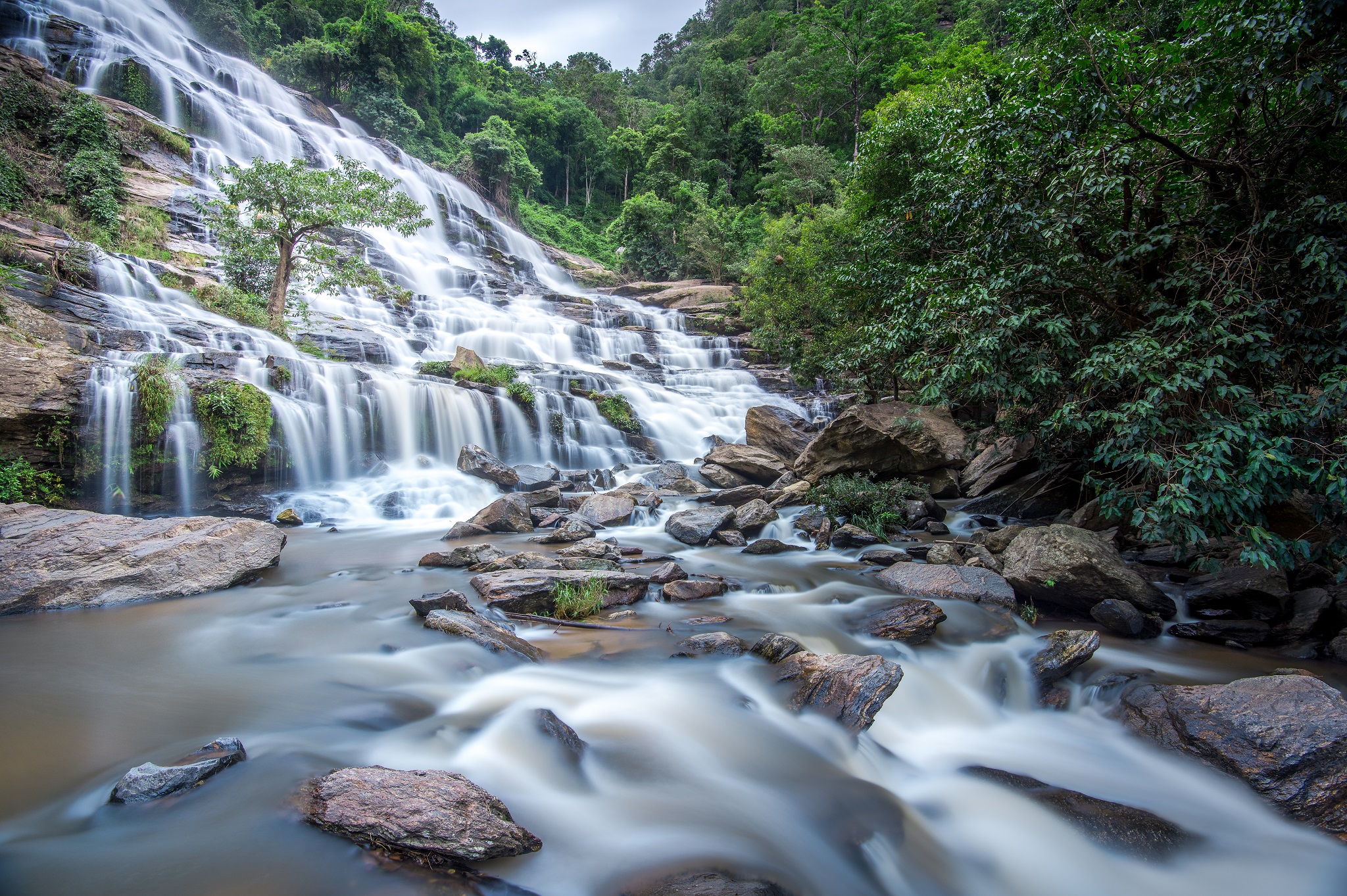 Twelfth place: Doi Inthanon National Park is named for Thailand’s largest mountain, and the scene captured here shows water flowing down that mountain. This is not this photographer’s first winning photos in a contest like this; Atirattanachai previously won first and ninth place in the 2017 Wiki Loves Monuments photo competition. This time around, the jury commended Atirattanachai for this “well thought out and executed piece of art.” Photo by Janepop Atirattanachai (BerryJ), CC BY-SA 4.0.

Thirteenth place: Surprise! Two long-eared owls are staring at the photographer who may have just disturbed them but managed to snap this spontaneous capture nonetheless. “Slightly comical,” said one jury member. Photo by Volodymyr Burdiak (Byrdyak), CC BY-SA 4.0. 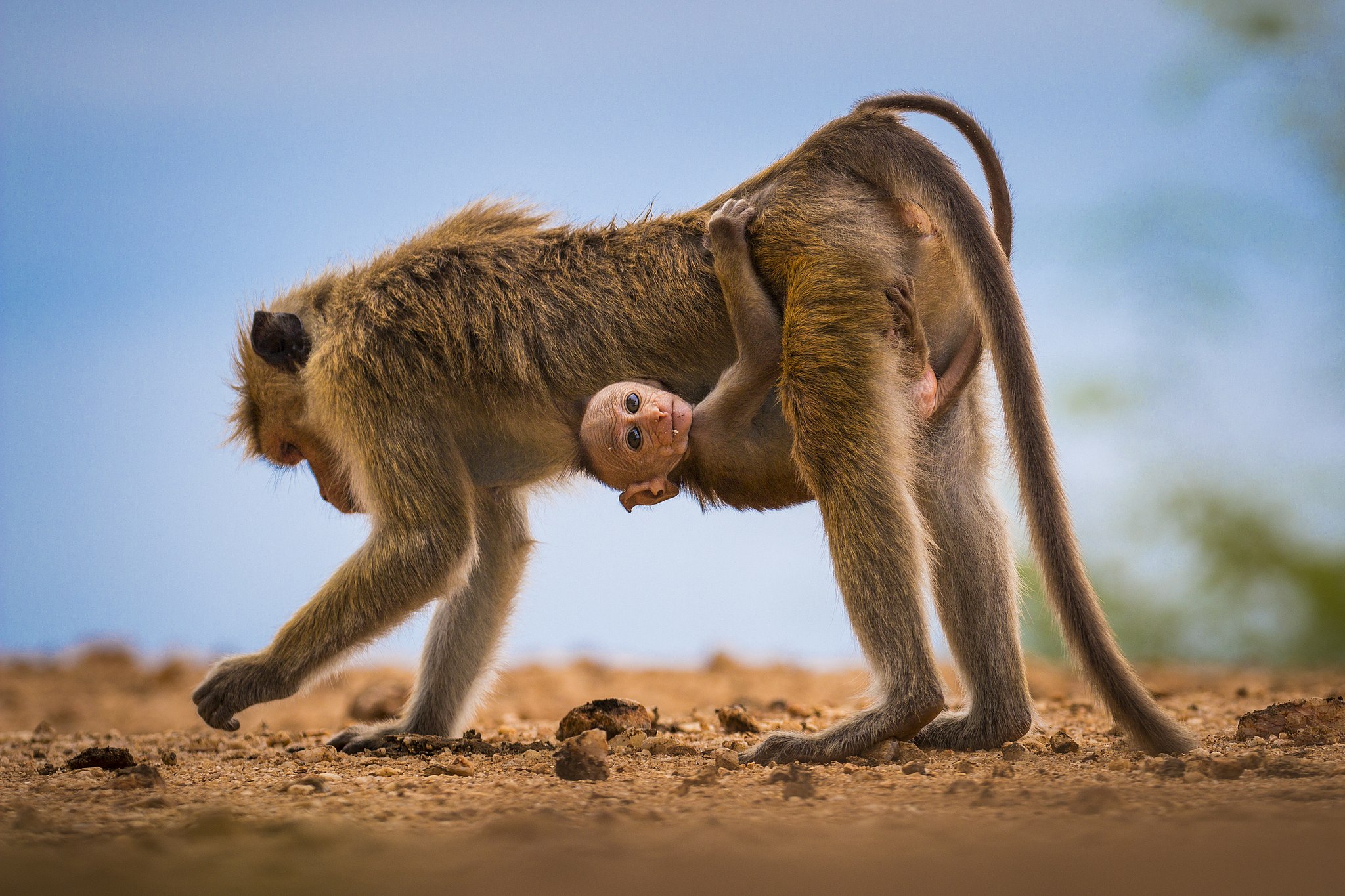 Fourteenth place: The toque macaque baby seen here is very aware of the photograph and their camera. However, according to the photographer, this adorable scene has a dark side. “Nature always belongs to those who nurture, care and protect it,” Senthilverl said. “But the humans have forcefully claimed it theirs and are on a path of destruction: destroying jungles, waterways and evicting the rightful owners, the wild animals. The Toque macaque (Macaca sinica) loves to traverse on trees and to be as one with the nature. But this click depicts their current plight. It was heartbreaking to see the mother with her child foraging on the hard ground at Katagamuwa Sanctuary [in] Sri Lanka.” Photo by Senthi Aathavan Senthilverl, CC BY-SA 4.0.

Fifteenth place (tied): These stalactite caves in Taiwan’s Shoushan National Park are beautifully backlit by the sun peeking in through the opening at the top. One jury member wrote that they particularly enjoyed the sunlight falling upon the young plant growing in the center of the image. Photo by 陳李銜 (Wargash107), CC BY-SA 4.0. 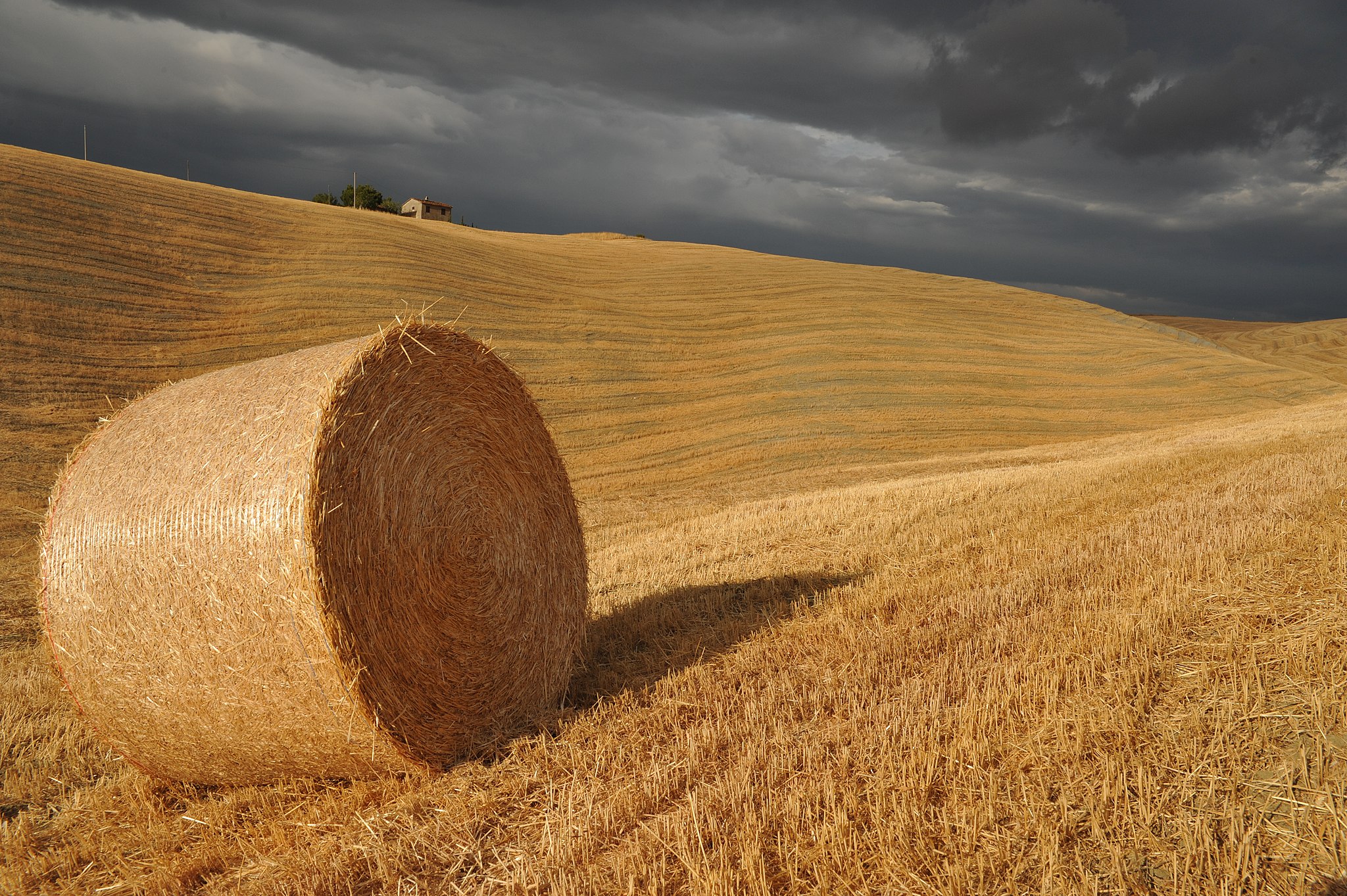 Fifteenth place (tied): This solitary straw bale was captured in Val d’Orcia, Tuscany, Italy, a UNESCO World Heritage Site which has been the frequent subject of art ranging from Renaissance paintings to the film Gladiator. The jury praised the image for its “great juxtaposition of textures, colours and hues.” Photo by JP Vets, CC BY-SA 4.0.

Editor’s note, 3 December 2019: Due to an editing error, the photos above originally ran out of order. Fourth and fifth place have been swapped, and eleventh, twelfth, and fifteenth places have been shuffled.