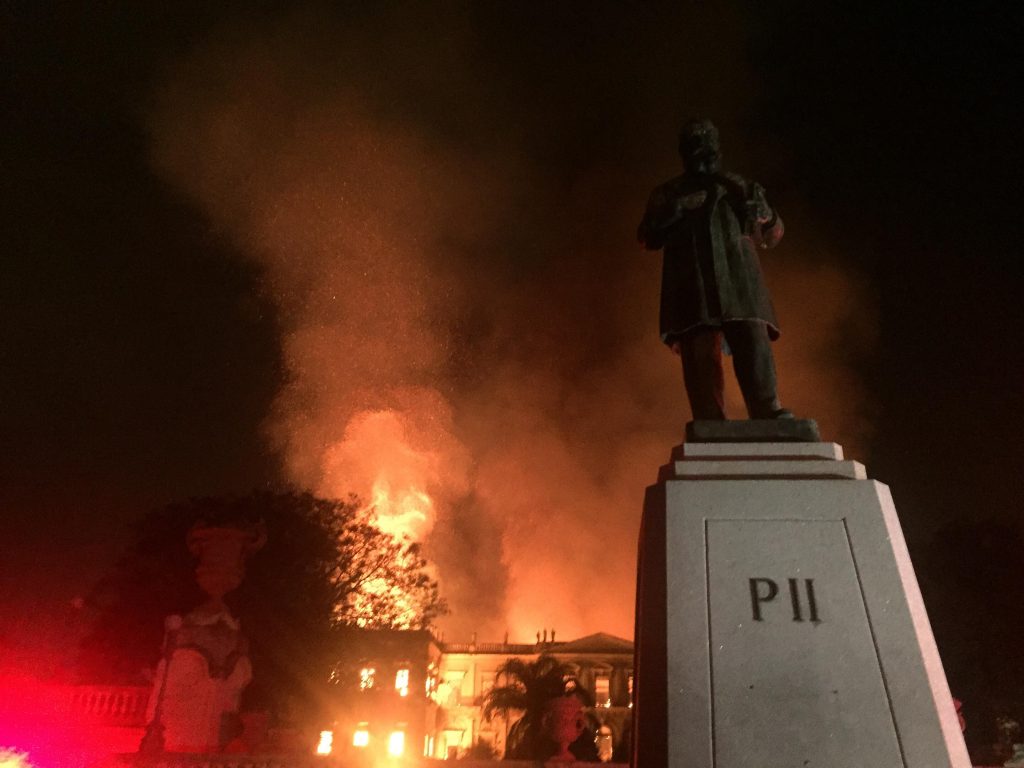 A statue of Brazilian Emperor Pedro II stands in front of his burning palace—and the site of the National Museum of Brazil.

As the global community of volunteer Wikimedia editors mourns the destruction of this amazing museum, this post pays tribute to all editors who have contributed restlessly to tell the story of the National Museum, our history.

On 2 September, disaster struck the National Museum of Brazil: a massive fire devastated the building and its extensive holdings. Centuries of cultural heritage, including recordings of dead languages and ancient artifacts from pre-Columbian times, were lost.

But amid the carnage and destruction, a movement has risen—one with the aim of adding as much knowledge about the museum’s collections to Wikimedia projects (including Wikipedia) before anything more is lost forever.

This mobilization includes the creation and development of articles about the disaster that destroyed the museum, which held the oldest scientific collection in Brazil and was one of the largest museums in Latin America, and the launching of a campaign to gather images on the building and collection. Long-time Wikimedia editors and first-timers got together to make sure we would learn from this incident, one that was a forcefully reminds us that the goal of recording the sum of all knowledge has a deadline.

According to the museum’s entry on the English Wikipedia, “The National Museum held a vast collection with more than 20 million objects, encompassing some of the most important material records regarding natural science and anthropology in Brazil, as well as numerous items that came from other regions of the world and were produced by several cultures and ancient civilizations […] The museum also held one of the largest scientific libraries of Brazil, with over 470,000 volumes and 2,400 rare works.”

Improvements on the article were coordinated among Wikimedians through social networks, as tasks were being assigned or taken up by many. On the Portuguese Wikipedia, around 250 people contributed to the entry on the museum and on the fire from 2 to 6 September. As of 10 September, entries on the fire existed in 21 languages.

The first picture of the fire was uploaded at 11:23 PM, only hours after the fire had begun. The photographer, Felipe Milanez, is a university professor and journalist, who had worked on research projects with the team of the National Museum. As he posted on Facebook on what he was seeing, I asked him to send me pictures of his to upload to Wikimedia Commons (a formal authorization to use the image followed). He sent five images; in just three days, this set was seen over 2 million times, particularly an image of the statue of the Brazilian Emperor Pedro II with the museum on fire behind. This was Felipe Milanez’s first contribution to Wikimedia projects.

“People need to know about this, [and] people need to see this”, said Felipe Milanez said on why he was contributing to Wikimedia Commons. He also wrote reports for the local and international press. According to him, the disaster that stroke the National Museum was associated with a lack of investment from the Brazilian government, which had cut funding for the institution.

Wikimedians then began publishing a call on social networks for people to upload images to Wikimedia Commons, a freely licensed media repository that holds many of the images used on Wikipedia, on the museum building and collection. In just three days, around 2,000 images of the museum taken before the fire have been uploaded. Images received were normally uploaded to a generic category on Commons, and more experienced users then worked to curate the content, often communicating through private messaging to discuss categorization strategies.

Student Juliana Gouy was one of those responding to the call. The National Museum is to her a special place, somewhere she went to with her family as a child; it was a calm refuge from Rio de Janeiro, one of the largest and hectic cities in Brazil. “As soon as I heard the fire was going on,” she said, “I felt the need to look at the pictures I had taken there and I thought many of my friends would like to see them. I shared these pictures publicly, and then many people started liking them.” That’s when she was approached to contribute the images to Wikimedia Commons.

Juliana Gouy had never contributed to Wikimedia Commons, and had actually never heard of the project. She uploaded a small set of images and, as she was having trouble with the UploadWizard, was given help to upload around 200 pictures of the museum building and its collections.

As content was being produced collaboratively, editors of the Portuguese Wikipedia agreed to a proposal by long-time editor Dornicke that a site banner should appear above all pages to mourn the loss of so much cultural heritage. This led to a formal call, translated into eleven languages, for people to contribute images on the building and collection to Wikimedia Commons.

This campaign, asking people to contribute their images of the National Museum, is still on. There is no fully digitized collection of the museum’s holdings, much less the ones that were destroyed in the fire. We need your help in preserving as much of the museum’s knowledge as we possibly can.

You may also be interested in helping with other Wikimedia museum partnerships, such as the Museu do Ipiranga, the Brazilian National Archives, and an ongoing facial reconstruction of Luzia.