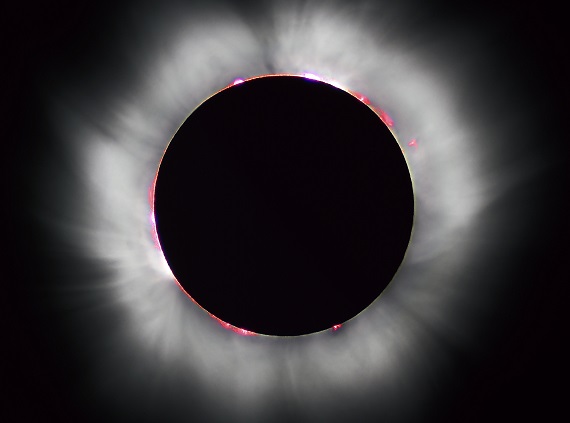 This coming Monday, 14 US states will have the chance to witness a total solar eclipse. Other parts of the Americas, as well as spots in Asia, Africa, and Western Europe, will see a partial eclipse. It is the first time in 99 years that the entire contiguous US will see an eclipse at the same time.

According to Wikipedia’s featured article on the topic, a solar eclipse occurs when the Moon passes between the Sun and Earth in such a way that the Moon blocks or partly blocks the Sun. In practical terms, this means that on Monday the sun will completely disappear for about 2.5 minutes along a narrow band of the US, moving west to east. There will also be several hours in which the moon is covering and uncovering the sun.

All of this partial and total darkness will have significant effects on the weather here on Earth. Temperatures will drop as much as 15 degrees Fahrenheit (9 degrees C), and the lack of sunlight will lower the high temperature for the entire day.

In the US, interest in the solar event is extremely high. Towns along the path of the eclipse are preparing for a large influx in tourists. Solar eclipse glasses, needed to view the sun without permanently damaging your eyes, are sold out or going for exorbitant prices.  But how should people document the eclipse to remember it for years to come? And how might we think about creating a public photographic record of the eclipse so that people in future years can experience the eclipse?

That’s where Wikimedia Commons comes in. Wikimedia Commons is a freely licensed repository for educational media content. It also hosts most of the images used on Wikipedia. By sharing your photographs on Wikimedia Commons (instructions below), you can ensure that your photos are part of a greater public record of the event, and that everyone across the world will be able to witness the event for themselves.

When taking your photo, consider safety first. Ensure you use proper protection when looking at the eclipse directly or through your camera. Here’s the same steps, except with links attached:

How should you approach photographing the eclipse, and what can you do to ensure you get the perfect shot? We talked with Juliancolton—a meteorologically focused article writer on the English Wikipedia and prolific photographer on Wikimedia Commons—about just that.

“I’m a landscape, nature, and night sky photographer,” Juliancolton says, “and my overarching goal is to capture familiar subjects or locations in striking or uncommon conditions.” In short, that means that Juliancolton does a lot of waiting around; uncommon conditions like dramatic light, intense weather, or rare astronomical events do not happen every day. “Much of my shooting takes place between dusk and dawn,” he says, “when most people are asleep and the world is, in my opinion, at its most beautiful.”

You can see some of his best work over on Wikimedia Commons, including a foggy sunrise in Rhode Island, lightning over the Hudson River, and a field of sunflowers set against the Milky Way.

For the upcoming eclipse, Juliancolton will travel to South Carolina’s Lake Marion, a body of water frequently called the state’s “inland sea.” He’d like to get close-up shots of the completely covered sun and “capture wider views of natural scenery bathed in the dim, ethereal light of totality,” he says. His camera setup with involve three DSLRs, “each intended to capture a different aspect of the phenomenon. Automation and many test-runs will allow me to shoot all three cameras while still enjoying the eclipse with my own eyes.”

Here’s what Juliancolton advises for your photographic efforts (our questions in bold):

What equipment goes into taking the perfect sky shot? How specialized does it have to be?

The most crucial part of taking spectacular images of the sky—whether the subject is celestial or confined to Earth’s atmosphere—is simply knowing when to look up, and being intimately familiar with whatever photography gear you own (camera phones and disposable film cameras included). Preparation and knowledge is much more important than purchasing the most sophisticated camera systems.

The upcoming total solar eclipse in the United States presents an exciting opportunity for photography novices and masters alike; many astronomy and photography writers have speculated that it will be the most photographed event in history. For an observer in the path of totality, where the Moon will completely obscure the Sun for a few minutes, some very nice photos of the darkened sky can be taken with smartphone cameras. More advanced imagery, including detailed shots of the eclipsed Sun, requires dedicated cameras and lenses, and even specialised astronomy equipment like solar telescopes and filters.

What kind of photographic setup would you recommend for people watching the eclipse?

In all of North America, northern South America, and small parts of western Europe, photographers will have the chance to capture a partial solar eclipse. For this, the goal will be to capture closeups of the crescent Sun, so it’s necessary to use a camera with high optical magnification or a very long lens, along with a solar filter. Without such a filter, which can be made of extremely dark glass or a special light-blocking sheet, photographing a partial eclipse will be impossible and hazardous to attempt. Even after blocking some 99.999% of light, shutter speeds will be relatively fast and consistent, so it will be possible to handhold a camera during partial stages of the eclipse. Consider taking photos at regular intervals, perhaps every 10 minutes, to show the progression of the eclipse in a timelapse or composite image.

Things get more complicated when attempting to photograph totality, and the moments just before and after. The same long focal lengths will be desired for the fully eclipsed Sun, but the required exposure times are longer and will change drastically from one moment to the next. I suggest using a DSLR in “manual” mode, and bracketing your exposures extensively—that is, taking many different frames with varying shutter speeds, so you can select the best ones later. To capture the Sun’s faint, outer corona, you’ll need either slow shutter speeds or relatively high ISOs, so cameras with good low-light performance are ideal, and a very steady tripod is essential. If possible, fire the shutter remotely using a wireless or cable release to minimise camera shake. Don’t forget to remove your solar filters at the very beginning of totality and replace them as soon as the Sun reemerges.

For some parting advice, don’t let photography ruin your eclipse experience. Use only the equipment you’re most comfortable with, and if your camera starts to cause you stress during this unique event, just turn it off. Finally, please remember to upload any images you do capture to Wikimedia Commons, even if it looks similar or identical to the hundreds of other photos that will surely appear. Scientists are hoping to use this eclipse as an opportunity to confirm suspicions that the Sun is slightly bigger than traditionally thought, so with precise geotagging, your photos may just have a large impact.

And most importantly, be safe. Never look at the sun without specialized glasses, as you will damage your eyes. Avoid being a person quoted fifty years from now about your eclipse-caused eye damage. If you are not in the narrow path of totality, you will need to have your glasses on for the entire eclipse. If you are in the path of totality, see NASA’s explainer on when you can have your glasses off.

Thanks to Blanca Flores of the Wikimedia Foundation for the infographic above. It’s licensed under CC BY-SA 3.0.

Wikimedia Commons accepts all kinds of educational media content, and it’s all freely licensed—available for anyone to use, anywhere, with no fee. Exact copyright licenses can vary, but generally you need to credit the author and share any remixes under a similar license. Join them today!