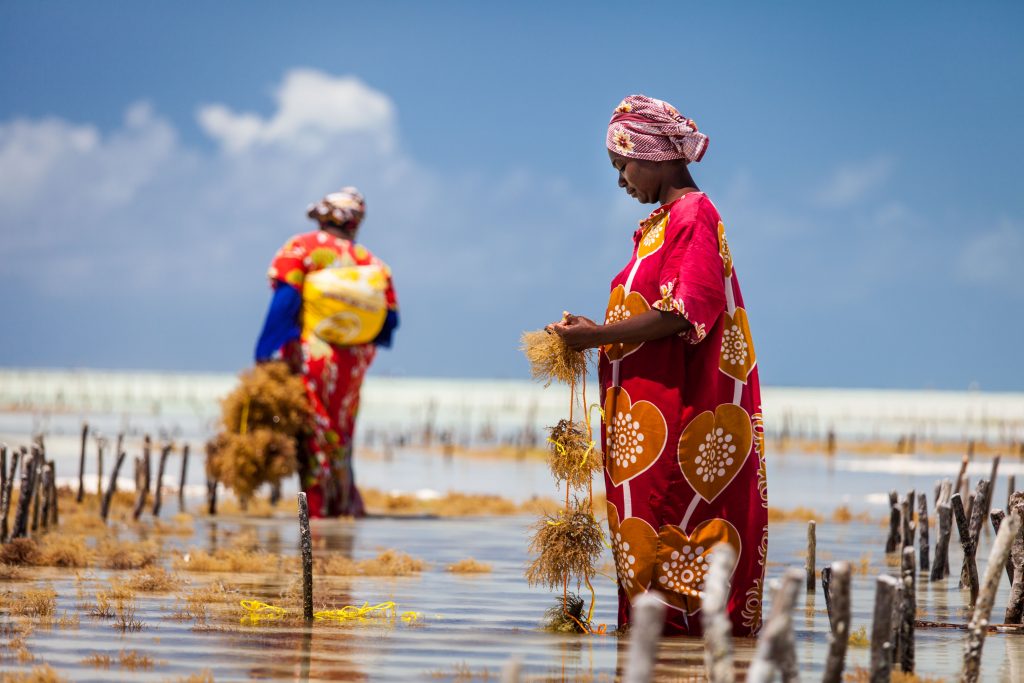 First place in the global jury prize went to Cape Town-based freelance photographer Yann Macherez. Macherez decided to spend an afternoon with his camera and seaweed farmers in Jambiani, a village on the southeast coast of Zanzibar. He wanted to learn about the trade that creates a living for hundreds of the village women: “the way they were farming it, what they did with their crop, and why they called it a ‘gift of the ocean’”:

Before farming seaweed was an option, many women in rural coastal communities were completely dependent on their husbands for their livelihoods. Today seaweed farming employs 25,000 people, mostly rural women, while upwards of 150,000 people benefit indirectly from the seaweed industry. Women found emancipation and an access to freedom because of this ‘gift’.

He submitted several photos to the contest, including the image above. Second place went to Italian photographer Marco Gualazzini, who became interested in photographing the continent to change Western attitudes about it: “most people in the west are not fully aware or even interested in learning about what happens in this beautiful continent,” he says.

Gualazzini’s photograph of a Somalian man carrying a dead hammerhead shark through the streets of Mogadishu struck a chord with this year’s contest jury members, but stories like this are far from new for him. “Telling the story of Somalia’s rebirth” is a story Gualazzini has committed to more than anything he’s covered in Africa over nearly a decade of photographing the continent, he says.

I’m working on a collection of stories that illustrate the heroic, solidarity-fuelled actions that take place here every day. These pictures I took, including the award-winning one of the man who carries the shark, seek to shed light upon these little examples of resilience and piece them together. Third place went to Cairo-based lawyer Hassan Elsayed, who told me that he takes every opportunity he can to get outside and take photos. Here, he was in Dahshur, Giza, with his camera up at the perfect time to capture a brief moment of affection between a young shepherd and his sheep.

These three winning images were only a small part of the latest Wiki Loves Africa photography and media competition, which showcases the continent’s rich diversity across a variety of themes.

All of the photos are uploaded under free licenses, meaning that you can use them free of charge with few stipulations.*

An annual competition held since 2014, Wiki Loves Africa founders and organizers Isla Haddow Flood and Florence Devouard say that a total of 40,000 photos have been uploaded in the contest’s history. That includes over 18,000 files in this year alone, donated to Wikimedia Commons by nearly 2,500 people.

(Wikimedia Commons is the photo repository of the Wikimedia movement. It holds most of the photos used on the hundreds of various language Wikipedia.)

Wiki Loves Africa’s theme changes each year, and this most recent one was focused on “people at work.” Participants were asked to upload their photos in October and November 2017, and local teams in participating countries were on hand to introduce the site to local photographers. An international jury selected the winning three images, seen above.

This year saw the introduction of a new category to the competition: photo essays, a collection of photos or a video to document an endangered work practice or women at work. Eric Atie, from Nigeria, and User:Rachelclarareed, from Tanzania, caught those two prizes (respectively). The stories behind those are located in two separate blog posts: “Zanzibar seaweeds in Tanzania” and “The making of thatch“.

A separate organizer’s prize went to User:Bentaylor13413 for his videos of glassmaking, which you can see below:

Video by Bentaylor13413, CC BY-SA 4.0. Due to browser limitations, the video will not play on Microsoft Edge, Internet Explorer, or Safari. Please try Mozilla Firefox instead, or watch it directly on Wikimedia Commons.

Video by Bentaylor13413, CC BY-SA 4.0. This video is subject to the same browser restrictions; if you encounter an error, please try Mozilla Firefox or watch it directly on Wikimedia Commons.

For more information on the winning photos, media files, and the competition, go to www.wikilovesafrica.net.

Editor’s note: Wiki Loves Africa was funded in part by a grant from the Wikimedia Foundation.

*License terms can vary depending on the image; a Creative Commons CC BY-SA license, for instance, would require you to credit the photographer and re-share the photo, even with modifications, only under a similar license. Please check each individual file page for the exact requirements.