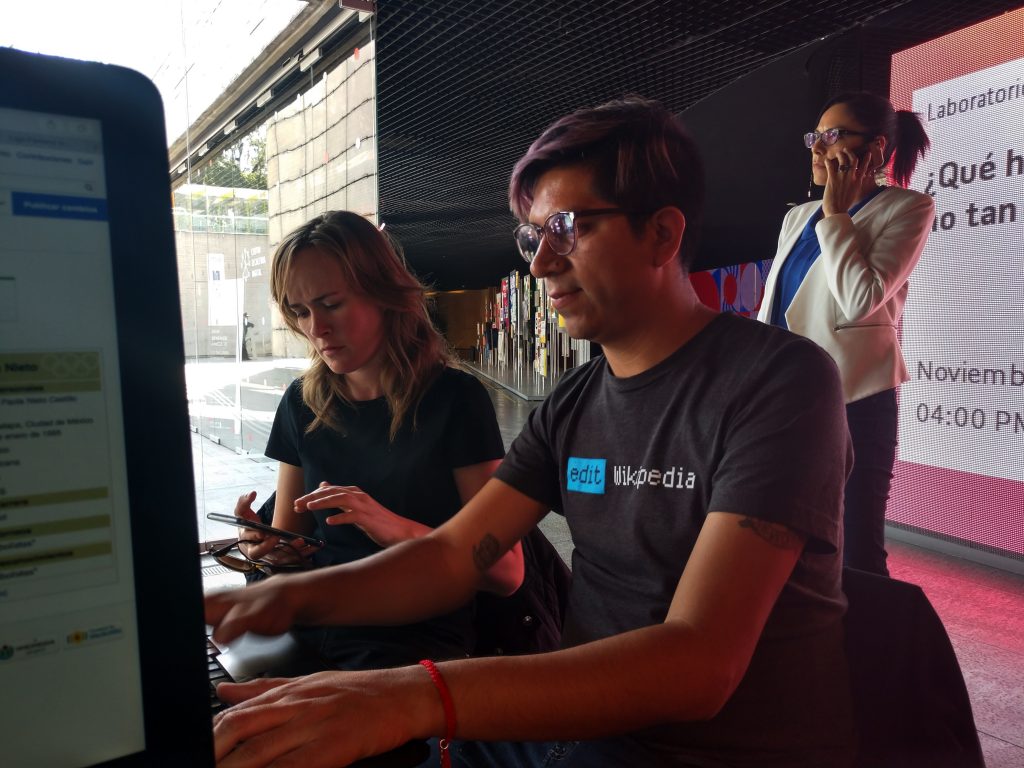 Women in sports are generally underrepresented on the internet, and the Spanish Wikipedia is no exception. As of October 2017, the Mexican male footballers category included 819 pages; the equivalent female category had just 43. At Wikimedia Mexico, the independent organization working to advance Wikimedia in the country, we are trying to change this by holding events that encourage writing about women in sports.

We were invited by the Cultural Digital Center of the Culture Secretariat of Mexico to start a series of editathons on Mexican women in sports with Versus Mexico, a non-governmental organization that works on promoting the culture of inclusion in the country.

Women in the sports journalism field are also hit by these deep-seated gender roles. Those who decide to break the barriers and work in the field are typically subjected to public and harmful messages that include trolling, hate speech, abuse, sexual remarks, sexist commentaries and even threats of death on a daily basis.

Marion Reimers, Jimena Sánchez, and Verónica Rodriguez are journalists at FOX Sports who decided to work with Versus Mexico on initiatives that can help reduce the gender gap in the sports journalism field.

On 25 November 2017, we held our first editathon that focused on female footballers. Ten participants gathered and wrote 21 new articles, along with improving 50 more. They added a total of 13,600 words added. Female sports journalists attended to support the editors. The event was broadcasted in situ by Ibero 90.9, the public radio station of Mexico City that devoted several hours to coverage of the event.

“One form of violence (against women) is that we still go unnoticed,” Carmen Alcázar, secretary of Wikimedia Mexico commented. “The media does not cover us, [and] history does not consider us. The aim of this event is that the new generations that consult Wikipedia more than other sources, know that not only there are great male midfielders but also great female midfielders.”

Wikimedia Mexico, Versus Mexico, and Centro de Cultura Digital have plans to make hold editathons about women in sports in more disciplines in 2018.

On 1 January, as part of celebrating the Public Domain Day, the state government of Odisha, Eastern India, announced the release of all digital content from its two major departments under Creative Commons licenses. The announcement is an outcome of a strong partnership between the state government and the Wikimedia community in Odisha.

The first department announced by the State Government to be the part of this initiative is the Information and Public Relations department; that informs the public on the government plans, projects and Programs. The I&PR department also publishes two magazines, Utkala Prasanga, a state magazine published in Odia language and Odisha Review, a 72-year-old state magazine published in English.

The second one is the ST&SC Development department; which works on the welfare of the backward and minority communities in Odisha. This department holds a major source of information in the form of Adivasi journal and research papers on the Indigenous community of Odisha from its Research and Training Institute.

Last year, the Government of Odisha became the first state government in India to release the content of its 8 social media accounts and the website of 2017 Asian athletics Championships under CC-BY-4.0 international license. As the license gives permission to use the work, this has overall helped in adding 207 distinct images into various Wikimedia projects.

As a next step in this collaboration, the government is planning to make other departments release their content and promote transparency and access to knowledge.

Wikiquote at the hospital

In Argentina, we have started a program to re-integrate people with serious mental illnesses into the community by proposing them a goal to help improve their self-esteem and reduce their feeling of loneliness and social isolation by learning how to edit Wikiquote.

The workshops help develop the intellectual and human development of one of the most vulnerable groups of our society, as these psychiatric patients, instead of being passive users of the network, create content and act as active contributors.

As an experienced psychologist working with mental health patients, I began this project because I wanted to help them go beyond their perception of loneliness and sense of emptiness. As a long-term Wikipedian and an administrator in Wikiquote, I wanted to recruit beginners to encourage them to create articles in Wikiquote in Spanish, because we have a very small community of active editors there.

I was inspired by User:Saintfevrier at Wikimania 2016 when she presented her work on the Wikitherapy program.

The venue was the Marcelo Hospital Torcuato de Alvear in Buenos Aires, Argentina. They provided a laboratory with desktop computers and free wifi access.

I had to design very small and manageable tasks for every class. The teaching was very personalized, much more than with healthier contributors. The classes were centered on explaining the basics of editing, formatting, and how to add citations. For example, one of the participants had no idea how punctuation works. He wrote his Wikiquote pages in a full stream. Details, like learning to use a quotation mark, were very complicated for him. I had to help him understand the beginning and the endpoint in sentences.

During the course, participants developed digital literacy, writing, research skills and they learned to write with others, to accept revisions of their work and to interact with other community members. Patients developed a wide range of skills and abilities that help them gain confidence by feeling that they make a meaningful contribution to our society.

I was contacted by a Spanish institution that works on Cognitive Accessibility in Full Inclusion, with people with intellectual disabilities, as they wanted to try to replicate the experience in Spain. I believe that this is a social entrepreneurship that could be replicated in a global way. “I focused on contributing to the Arabic Wikipedia as the participation there was very low and it was not progressing enough like the other Wikipedias, even with the large Arabic-speaking population and being a rich culture.”

In addition to his work to coordinate TWL, Bachounda helps translate The Wikipedia Library newsletter, Books & Bytes and helps share the program updates with the Arabic community.

Attribution Generator translated to Spanish, Portuguese: A new blog post on Wikimedia Germany’s blog outlines the experience of two Wikimedians who translated the chapter’s Attribution Generator—used to simplify the attribution requirements of Creative Commons-licensed media—into Spanish and Portuguese. “Everyone in the world can take advantage of free photos,” users Santamarcanda and Ivanhercaz write, so “why it should not be [simplified and] convenient to use them in their own language?” (our rough translation from German). The original blog post is available in German, Spanish, and Portuguese.

Sweden hosts Wikimania 2019: The steering committee of Wikimania, the annual conference of the Wikimedia movement, announced on Wednesday, that Sweden will be the host of Wikimania 2019. “The exact location of the conference will be confirmed at a later date,” said Ellie Young, Events Manager of the Wikimedia Foundation in an email she sent on behalf of the Wikimania steering committee to Wikimedia-l public mailing list. “The committee appreciates and values the long-standing interest of Wikimedia Sweden to host that event, and we believe that hosting Wikimania will be an opportunity to boost Wikimedia projects there with a specific focus on public art, a field in which the Swedish team has been particularly active.”

Wikipedian Krzysztof Machocki passes away: On 31, January, the Wikipedia community lost one of its prolific contributors. Machocki was a long time Wikipedian and was the spokesperson of Wikimedia Poland. Fellow Wikipedians left hundreds of messages of condolence on a memorial page they created for his family on the Polish Wikipedia. Others started a crowdfunding campaign to support his children’s education. “Krzysztof was known for his joy and passion,” said Natalia Szafran-Kozakowska an email to Wikimedia-l, “for his faith in how Wikipedia makes the world better. We lost him but let us not lose that faith.”